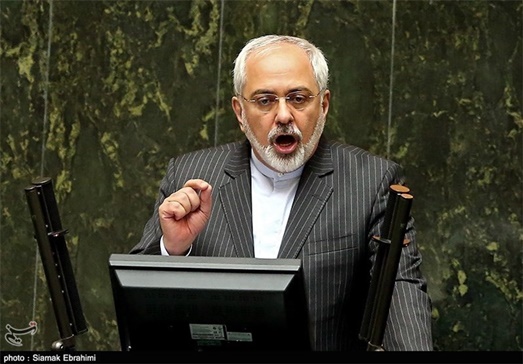 Iranian Foreign Minister Mohammad Javad Zarif underlined that the July 2015 nuclear deal between Tehran and six world powers does not translate into an end to the West’s animosity against the Islamic Republic.

Zarif attended an open session of the newly-elected parliament on Sunday morning, June 12, for the first time to brief MPs on the process of implementing the deal – known as the Joint Comprehensive Plan of Action (JCPOA) – and answer the lawmakers’ questions about the impact of the JCPOA on the country’s economy.

With the nuclear agreement, Iran managed to remove the economic obstacles imposed on people under the pretext of the country’s nuclear program, he noted.

“We managed to counter Western parties’ threats, which had created a negative atmosphere against the Islamic Republic,” the top diplomat said, highlighting the new atmosphere created after the implantation of the JCPOA and removal of anti-Iran sanctions.

“However, this does not mean the end of hostility by those who regarded the Islamic Republic as an obstacle to attainment of their goals,” he added.

Elsewhere in his remarks, Zarif pointed to the large number of foreign delegations visiting Iran after the nuclear deal, describing it as an indication that the world sees Iran as a safe place for cooperation.

Tehran and the Group 5+1 (Russia, China, the US, Britain, France and Germany) on July 14, 2015, reached a conclusion over the text of the JCPOA. The accord took effect in January, terminating all nuclear-related sanctions against Iran.