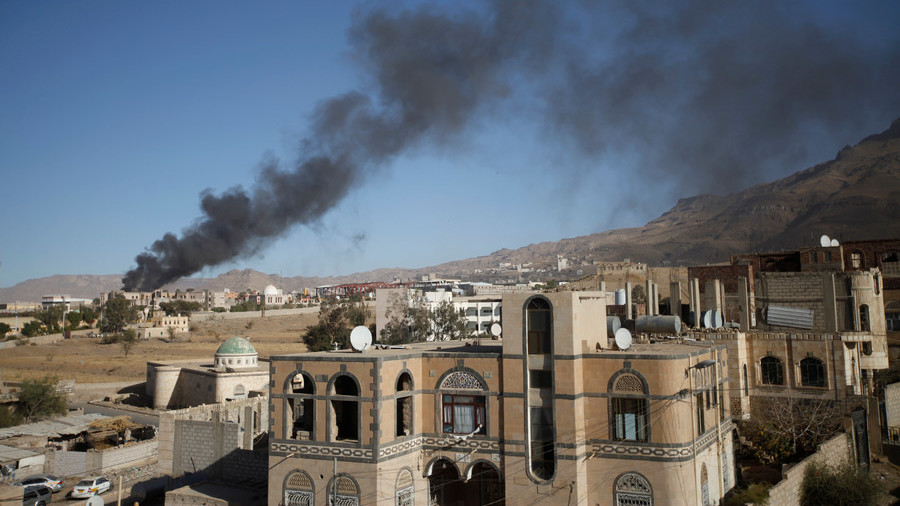 Iran urges UN to do more to end Yemen war

Massive explosions have been reported in the Yemeni capital city of Sana’a after Saudi fighter jets conducted a fresh round of airstrikes on residential area.

They struck the al-Thawra Sports Complex, which is home turf for the Yemeni national football team, early on Friday.

A medical source, who preferred not to be named, told Yemen’s al-Masirah television network that the strikes caused panic and fear among patients and medical staff and put the medical center out of service.

“The violent attacks hit the residential area in this street, causing damage to Oliya Hospital and residential houses,” one local resident told al-Masirah.

“The Saudi airstrikes targeted my bus…look at the neighborhood, shattered windows are everywhere…they attacked when everyone was resting at their homes,” another resident noted.

“This is a residential area and there is no military base or camp around here. May God damn the US, Israel and their allies, Saudi Arabia and the United Arab Emirates, an anyone who targets innocent people late at night,” the third resident added.

There were no immediate reports of casualties or extent of damage as a result of the airstrikes, which sent panic-stricken residents of nearby buildings into the streets.

Saudi jets also conducted airstrikes against several buildings on Zubairi Street, as well as a number of sites next to Baghdad School and the Vocational Institute. No reports about possible casualties and the extent of damage caused were quickly available though.

A senior member of Yemen’s Supreme Political Council denounced the air raids against various neighborhoods in the capital Sana’a, calling on the United Nations to launch an investigation into the air raid on the al-Thawra Sports Complex.

“The decision by the coalition of aggression to give a six-hour ultimatum for the evacuation of the stadium resembles what the Zionist entity is doing in the Gaza Strip,” Mohammed Ali al-Houthi wrote in a series of posts published on his Twitter page.

He called on UN experts to visit the bombed sports complex and carry out a careful investigation.

“If they found drones or missiles inside the stadium, as leaders of the Saudi-led coalition allege, we will not hesitate to hand them over to the United Nations. But if they (the experts) could not discover anything, the leaders of the alliance must then commit themselves to stopping the bombing campaign,” he added.

“If they found drones or missiles inside the stadium, as leaders of the Saudi-led coalition allege, we will not hesitate to hand them over to the United Nations. But if they (the experts) could not discover anything, the leaders of the alliance must then commit themselves to stopping the bombing campaign,” Houthi pointed out.

Nasr al-Deen Amer, Deputy Minister of Information in Yemen’s National Salvation Government, called upon all Yemeni journalists and members of the press to visit the al-Thawra Sports Complex, and document the fact that there are no munitions there.

Earlier, the Riyadh-led coalition of aggression had claimed that Yemen’s Ansarullah resistance movement was using the al-Thawra Sports Complex as an arms deports, and demanded that Yemeni forces remove weapons from the stadium in Sana’a.

It declared a six-hour ultimatum, which reportedly went into effect as of 8 p.m. local time (1700 GMT) on Thursday.

The committee announced in a statement that sports centers in Yemen are civilian facilities, have nothing to do with military applications and do not contain any sort of weapons.

“No weapons or military equipment were stockpiled inside all the sports facilities targeted since the start of the Saudi-led aggression in March 2015. Many Yemeni sports facilities, including stadiums and closed halls, are now in ruins, leaving athletes deprived of exercising and performing their activities. It took many years and huge sums of money for these centers to be built. It is, therefore, not easy to reconstruct them,” the statement read.

The committee called upon sports federations worldwide and all concerned parties to intervene quickly, and to stop Saudi aerial assaults against the remaining Yemeni sports facilities so that Yemeni youths and athletes of Yemen would not find themselves without stadiums.

Bukhaiti told the Arabic service of Russia’s Sputnik news agency that the Yemeni army forces and fighters from the Popular Committees would soon respond strongly to the Saudi-led airstrikes on Sana’a.

He highlighted that the Riyadh regime has reached a stalemate in the war on Yemen, and has been unable to attain any of its objectives, adding that Saudi Arabia has been the target of intense retaliatory rocket and drone strikes in recent years, and has now opted to pound residential buildings and civilian facilities, such as Sana’a International Airport, in Yemen.

Bukhaiti noted that the heavy bombardment of Sana’a airport comes despite the fact that the site remain out of service.

“Saudis have also bombed most of important bridges in Sana’a. All of this shows they are punishing the Yemeni nation with military strikes and siege. Attacks on civilians will not go unanswered. Yemen now has the ability to strike targets deep inside Saudi Arabia. Saudi attacks once again exposed the hypocritical position of the international community, which has so far failed to release a statement in condemnation of attacks by Saudi Arabia and the United Arab Emirates (UAE) on civilian sites,” he pointed out.

Bukhaiti highlighted that the Yemen war has well demonstrated the inefficiency of international mechanisms, which depend on the United Nations and the Security Council.

“The international community needs a new order more than ever, or at least world states should adhere to existing agreements, such as the ban on attacks against civilians,” he added.

Elsewhere in his remarks, Bukhati emphasized that there is definitely a connection between the advance of Yemeni army forces and Popular Committees fighters in Ma’rib with the escalation of Saudi-led airstrikes on Sana’a.

Saudi Arabia, backed by the United States and regional allies, launched the war on Yemen in March 2015, with the goal of bringing the government of former Yemeni president Abd Rabbuh Mansour Hadi back to power and crushing Ansarullah movement.