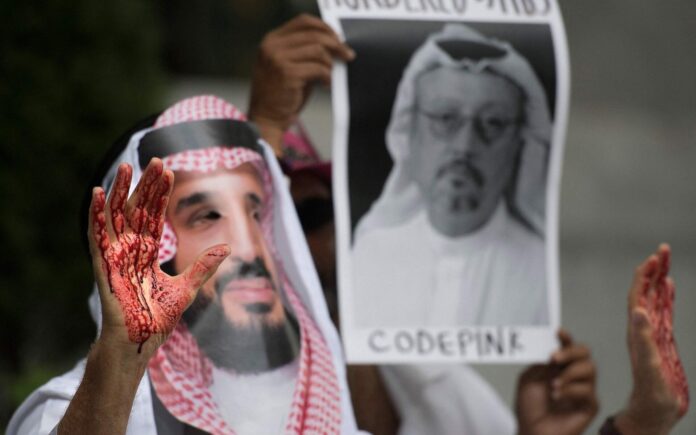 Four of the Saudi agents who murdered dissident journalist Jamal Khashoggi in Turkey have received paramilitary training in the United States, according to a report. A team of Saudi agents subdued, killed and then dismembered Khashoggi in October 2018 at the Saudi consulate in Istanbul.

The 59-year-old, who had angered Crown Prince Mohammed bin Salman with his criticism of the kingdom, was murdered in October 2018, after he entered the Saudi consulate in Istanbul. His body has never been recovered, and Western intelligence services believe it was dismembered.

The prince, commonly known as MBS, has always denied any involvement in the writer and broadcaster’s death, though earlier this year the Biden administration released an intelligence report saying he knew about and approved of the plan.

Now a report claims that four of the dozen-strong “kill team” received paramilitary training in the United States, as part of a contract approved by the State Department.

The New York Timessaid the men received the training from the Arkansas-based security company Tier 1 Group, which is owned by the private equity firm Cerberus Capital Management.

The company has said the training, which included “safe marksmanship” and “countering an attack”, was intended for the protection of Saudi leaders.

It quoted Louis Bremer, a senior executive of Cerberus, the group’s parent company, as having confirmed its role last year in written answers to questions from politicians in Washington DC.

He was being questioned as part of his nomination for a senior Pentagon job during the Trump administration, a nomination that was later withdrawn.

It said that Mr Bremer provided his answers to the newspaper, and confirmed four members of the Khashoggi kill team had received Tier 1 Group training in 2017, and two of them had participated in a previous version that ran between October 2014 until January 2015.

“The training provided was unrelated to their subsequent heinous acts,” Mr Bremer said in his answers.

He said a review in 2019 review by Tier 1 Group “uncovered no wrongdoing by the company and confirmed that the established curriculum training was unrelated to the murder of Jamal Khashoggi”.

The training would have been carried out at a time when Barack Obama was president.

There was no immediate response from Cerberus to inquires from The Independent .

In a statement, State Department spokesman Ned Price said: “We are restricted under Section 126.10 of the International Traffic in Arms Regulations (ITAR) from commenting on individual companies’ licencing status or confirming related activities. As such, we can’t confirm or comment on any of the licenced defence export licensing activity alleged in media reporting.”

He added: “Saudi Arabia faces significant threats to its territory, and we are committed to working together to help Riyadh strengthen its defences. At the same time, the American people expect that US policy towards its strategic partnership with Saudi Arabia will prioritise the rule of law and respect for human rights, which are inseparable from the interests that the United States brings to that partnership.”

In March, lawyers for the fiancee of Mr Khashoggi said they had the crown prince legal complaint – allowing proceedings against the Saudi royal to proceed.