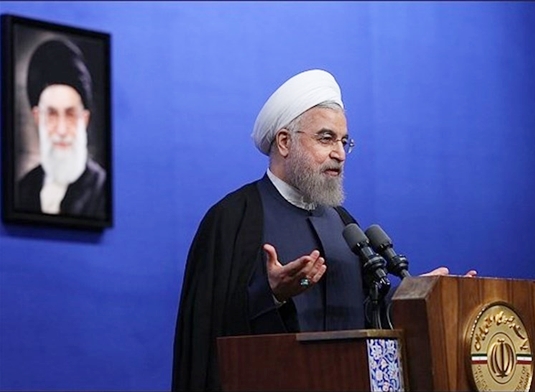 Iranian President Hassan Rouhani highlighted the country’s economic progress during his term, saying Iran’s economy is on the right track despite a whole host of problems that have gripped oil-exporting countries.

“Despite all the obstacles and problems that have particularly arisen in the oil-exporting countries, our economy is on the right track,” the president said in a ceremony attended by his cabinet members, held at the mausoleum of the late founder of the Islamic Republic, Imam Khomeini, south of Tehran.

The event was held on Tuesday, at the beginning of the Government Week, as a gesture of allegiance to Imam Khomeini’s goals.

Highlighting the major achievements by his administration over the past three years, President Rouhani said the inflation rate is now a single-digit number dropping to below 9 percent, the economic growth in the first quarter of the current Iranian year has increased to 4.4 percent, the industrial growth has risen to 8.8 percent, and the value of non-oil exports has risen by $3.3 billion, outstripping the value of imports after many years.

He also noted that the country has managed to struggle through all the anti-Iran resolutions and sanctions, saying today’s conditions are set for progress and development more than ever.

The administration is determined to carry out the Resistance Economy policies, trigger economic boom and progress, and create jobs, he underlined.

Thereafter, President Rouhani said his administration would make every effort to carry out the policies of Resistance Economy.

Back in 2014, Ayatollah Khamenei had sent a proclamation to heads of Iran’s branches of power and outlined general policies to boost the country’s economy and lower its vulnerabilities under a grand plan, dubbed Resistance Economy.