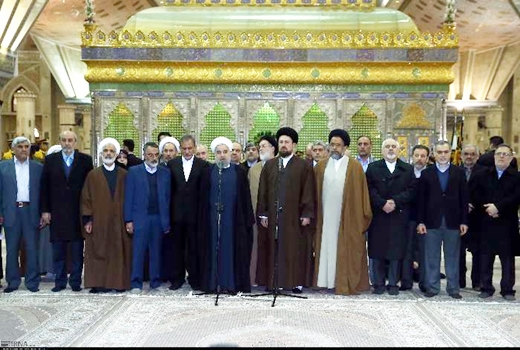 President Hassan Rouhani and members of his cabinet paid tribute to the Founder of the Islamic Republic, the late Imam Khomeini, at his mausoleum Sunday morning.

During the ceremony, Imam’s grandson Hassan Khomeini received the President and the cabinet members.

President Rouhani and the cabinet members also paid tribute to the late Imam’s wife and son.

They laid wreaths at the tomb of the Father of the Islamic Revolution.

The president also paid homage to the martyrs of the 1979 Islamic Revolution.

The visit to the holy shrine took place on the occasion of the Dahe-ye Fajr (10-Day Dawn) which marks victory of the 1979 Islamic Revolution.

During the Ten-Day Dawn festivities, Iranians take part in different events and activities to remember their revolution. Every year tens of millions of Iranians also take to the streets to commemorate the final day of the festivities, on the 22nd of Bahman, or February 11th, which marks the victory of the Islamic.