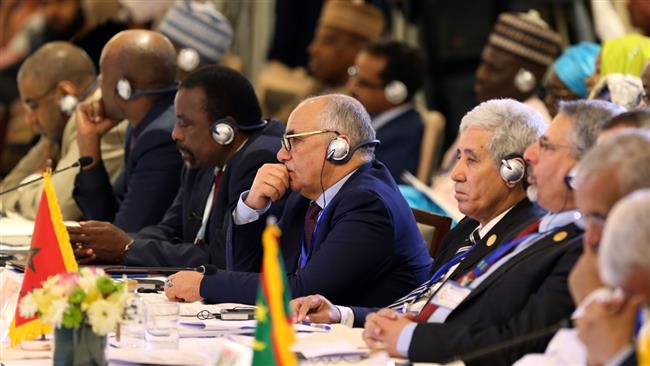 Muslim parliamentarians have condemned US President Donald Trump's recognition of Jerusalem al-Quds as Israel’s capital as a threat to the global peace and a violation of the Palestinian nation’s rights.

“We consider this measure as a threat to the international peace and security and an all-out violation of the unalienable rights of the Palestinian nation and a futile measure which distressed Muslims, Christians and all the free-thinking human beings across the world,” the 13th Session of the Parliamentary Union of the Organization of Islamic Cooperation (OIC) said in its final statement issued in Tehran on Wednesday.

In December 2017, Trump said Washington was recognizing Jerusalem al-Quds as the “capital” of Israel and planning to relocate the American embassy from Tel Aviv to the holy city.

The entire Jerusalem al-Quds is currently under Israel’s control, while the regime also claims the city’s eastern part, which hosts the third holiest Muslim site.

The city, which Palestinians want as the capital of their future state, has been designated as “occupied” under international law since the 1967 Arab War.

The OIC parliamentarians expressed support for the Palestinian nation and their resistance movement in all forms as long as the Palestinian people’s right to return to their homeland and form an independent government with East Jerusalem al-Quds as its capital has not been restored.

The statement called on the Inter-Parliamentary Union to revoke the membership of Israel’s Knesset as a punitive measure for the regime’s violation of international law.

The Muslim lawmakers also condemned Trump’s “racist” statements against the people of color and his efforts to link Islam to global terrorism, expressing concern over divisive measures which create misperception among different civilizations and religions.

The OIC legislators also expressed concern over the grave humanitarian crisis in Yemen and underlined the need for efforts to find a political solution for the crisis and expedite the delivery of humanitarian aid to all parts of the country.

The statement also slammed the blatant violation of the rights of Rohingya Muslims in Myanmar and the ongoing ethnic cleansing of the Muslim minority. It urged the government of the country to immediately put an end to the atrocities and respect the fundamental human rights and freedoms of all without any racial and religious discrimination.

The Muslim parliamentarians also called on the OIC governments to establish a new economic system based on Islamic unity and lay the groundwork for promotion of financial and economic ties among all the member states.