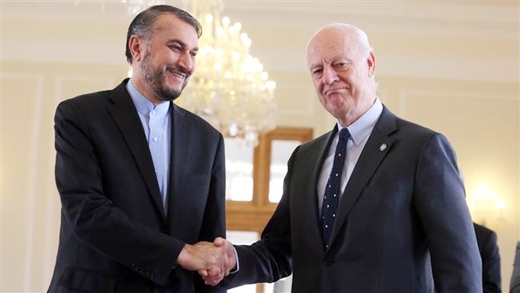 The Deputy Foreign Minister for Arab-African Affairs, Hossein Amir-Abdollahian, said on Tuesday, “We are now close to a political resolution to solve the Syrian crisis.”

The talks between the Syrian government, opposition groups and civil society are on the verge of a new phase. Amir-Abdollahian commented that, “We are glad to witness that the grounds for political resolution to solve the Syrian crisis have been prepared.”
Amir-Abdollahian made the remarks on the sidelines of his meeting with the UN special envoy for Syria Staffan de Mistura, in Tehran on Tuesday. Speaking to reporters, he said that they he had had very significant negotiations with the UN envoy for Syria on the continued political talks on the Syrian crisis.
In the meeting, many topics were raised, including the concern about the increase in the activities of irresponsible armed groups in Syria in recent days, and also the rise in the number of ceasefire violations, which can harm the pace of political progress in the country, Amir-Abdollahian said.
Humanitarian aid shipments are delivered quite selectively by some groups, which has created many problems, he added.
Supporting the efforts of the UN envoy for Syria to resolve the country’s crisis through political means, he said, “We are very satisfied to witness that regional and international parties are serious in the fight against terrorism, and are trying to bolster the pace of political talks and avoid taking actions against Syria’s national interests.”
“The fight against terrorism should be continued seriously, and talks between the Syrian government and opposition groups can produce satisfactory results,” he stated.
Some terrorist groups had tried to enter into talks with the Syrian government under concealed identities, he said.