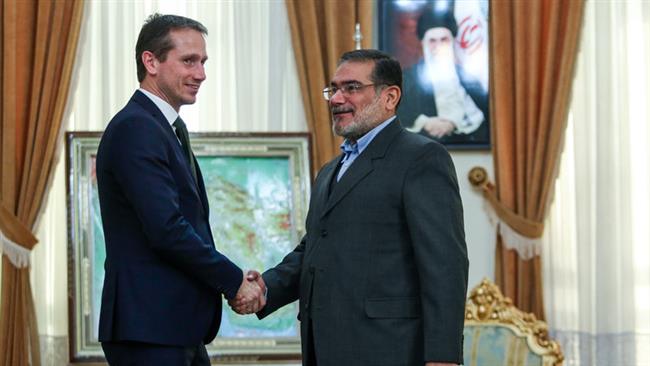 Danish Foreign Minister Kristian Jensen said his country is determined to boost relations with Iran in all fields and added that the two countries have numerous grounds for economic and technical cooperation.
Tag: Iran-Denmark

A senior Iranian official says any attempt to impose new sanctions on Tehran and restrict its defense and deterrence capabilities will undermine the nuclear agreement reached between Iran and P5+1.

In a meeting with Danish Foreign Minister Kristian Jensen in Tehran on Monday, Secretary of Iran’s Supreme National Security Council (SNSC) Ali Shamkhani reaffirmed the Islamic Republic’s goodwill to precisely and swiftly implement its obligations under the nuclear agreement, known as the Joint Comprehensive Plan of Action (JCPOA), and said the execution of the deal requires that both sides fulfill their commitments.

He added that Iran will show a “strong reaction” to any measure aimed at imposing restrictions on its defense capabilities.

In a letter to Iran’s Defense Minister Brigadier General Hossein Dehghan on December 31, President Hassan Rouhani ordered stepped-up production of missiles after reports that the US was preparing fresh sanctions on international companies and individuals in Iran.

The Wall Street Journal said later that the White House had delayed plans to impose new sanctions on Iran but added that the measures remained on the table.

The SNSC secretary further expressed hope that exchange of political and economic delegations between Iran and European countries would have positive outcomes on the expansion of all-out relations.

Shamkhani said the necessary ground has been prepared for Tehran and Copenhagen to improve cooperation in various economic and industrial sectors.

The Danish foreign minister, for his part, commended Iran’s effective measures to precisely fulfill its commitments under the JCPOA.

Jensen said his country is determined to boost relations with Iran in all fields and added that the two countries have numerous grounds for economic and technical cooperation.

On July 14, 2015, Iran and P5+1 finalized the text of the JCPOA on Tehran’s nuclear program in the Austrian capital, Vienna.

Under the agreement, Iran will accept restrictions on its nuclear program in return for the removal of sanctions imposed on Tehran by the US and the EU.