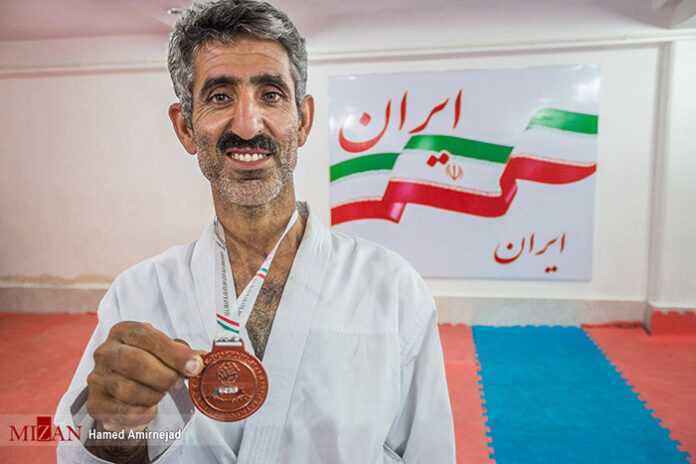 Yadollah Javanian is an industrious street sweeper who has emerged victorious in Iran’s Karate championships and speaks English fluently.

Social media users have been recently talking about the Iranian street sweeper who has won the third place in Gōjū-ryū style of national karate championships.

Born and bred in Iran’s northern province of Mazandaran, Javanian, 40, is said to have started professional practicing of karate over 20 years ago.

Here’s IFP’s translation of a report by Shahrvand Newspaper.

Despite his older age, Javanian is a tough rival for karate fighters. He said, “I take part in the national games almost every year, and in 2014 I managed to win gold medal in Gōjū-ryū style.”

He said he has won bronze medal in the current and last year’s games, and added, “I started karate in 1996 and even became a medal winner for my country in 1998. In 2004, I attended the classes of a Japanese karate master of Gōjū-ryū style in Tehran.”

It is quite surprising to know that Javanian’s talents and capacity are not limited to martial arts only, as he takes English classes too.

“My working hours at nights finish at 4 am, so I have an opportunity to go to an English institute in the morning and from there I head right to the karate club,” he said.

Expressing surprise that some people find it strange that he, as a street sweeper, knows English, Javanian concluded, “I have always had a strong liking for English language and now I have almost gained a mastery over it.”

Javanian pointed to his family’s discontentment over his job as a street sweeper and said, “I have been a worker in Mazandaran’s municipality for years and only a few years ago I started sweeping streets in Mazandaran’s Neka County.”

“My family became upset when they saw my championship picture in the orange uniform of a street sweeper,” he noted, while stressing that he is proud of his job though.

I’m Proud of My Job

Javanian went on to say that he has not become a street sweeper under the pressure of financial problems and argued, “It never bothers me to be a street sweeper. I hold a firm belief that in a country where thousands of martyrs have given up their lives so that Iranians can sleep in comfort, I can also provide people with this convenience by making the environment beautiful even if I’m not someone important.”