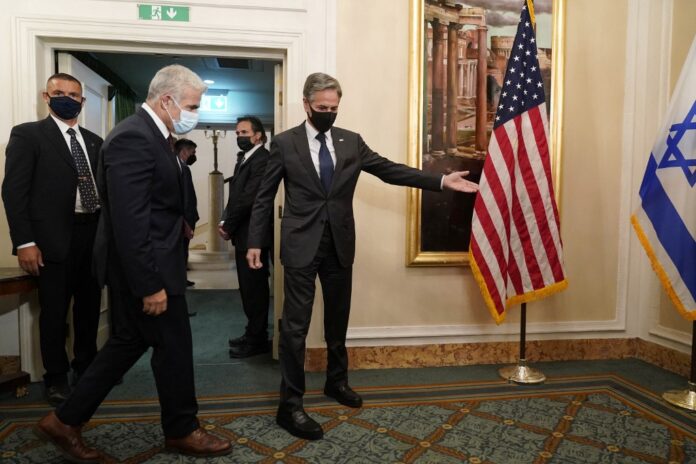 Israeli Foreign Minister Yair Lapid is scheduled to talk Iran in meeting with US officials. Lapid’s visit will take place as talks over the Iran nuclear deal are stalled.

Israel’s top diplomat will be in Washington from Oct. 12 though Oct. 14, during which time he will hold discussions with Secretary of State Antony Blinken, National Security Adviser Jake Sullivan and Vice President Kamala Harris, multiple news outlets reported on Wednesday, citing Lapid’s office.

The string of meetings come as the U.S. and Iran are at a stalemate in their nuclear talks.

Biden has said he wants Iran to re-enter the Joint Comprehensive Plan of Action (JCPOA) — the nuclear deal that was brokered under the Barack Obama administration in 2015, which former President Donald Trump withdrew from in 2018 — contending that the agreement is the only way the U.S. can stop Iran from obtaining a nuclear weapon.

Nuclear talks had been underway in Vienna but they were ultimately adjourned in June. Now, the U.S. has only been engaging in indirect talks through its allies.

Earlier this month, however, the country’s Foreign Minister, Hossein Amirabdollahian, asked that the U.S. unfreeze $10 billion of its funds to restart nuclear discussions.

Israel is now looking to develop a backup plan for if the U.S. talks with Iran fail, according to Axios.

Lapid and Blinken also met in June during a trip to Rome, according to The Jerusalem Post.

Sullivan met with his Israeli counterpart, Israel’s national security adviser Eyal Hulata, on Tuesday, as part of a chain of meetings between the U.S. and Israeli officials to talk about their military, diplomatic and intelligence communities.

The White House emphasized that diplomacy remains the ideal course of action when it comes to nuclear talks.

“We, of course, remain committed to a diplomatic path,” a senior administration official stated.

Israeli Prime Minister Naftali Bennett slammed Iran during his own speech to the U.N. General Assembly, saying that the Islamic republic had crossed all nuclear red lines.

“Iran’s nuclear weapons program is at a critical point. All red lines have been crossed,” Bennett continued.

“Iran’s nuclear program has hit a watershed moment, and so has our tolerance. Words do not stop centrifuges from spinning,” he added, promising that Israel “will not allow Iran to acquire a nuclear weapon”.

Iran’s permanent ambassador to the United Nations has denounced the blame game launched against Iran by Israel.