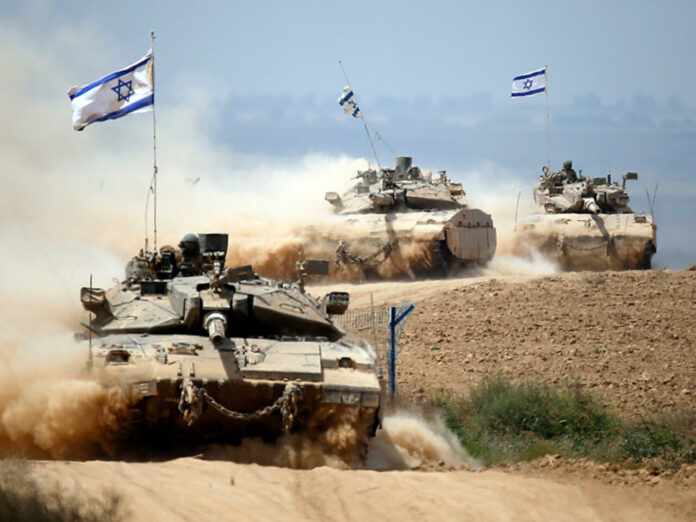 The Israeli army has deployed a large number of tanks to the Golan Heights after the Damascus government vowed to reclaim the strategic Syrian region.

Israel’s military has moved its tanks to the occupied Golan Heights, a 500-square-mile area with strategic importance, in a dangerous move smacking of provocation.

In a report on Tuesday, Rusiya Al-Yaum (RT Arabic) said the regime in Tel Aviv had dispatched a “large number of tanks” to the rocky plateau presently under the illegal occupation of Israel.

It comes in the wake of an announcement by Israeli Prime Minister Naftali Bennett that the number of Israeli settlers would be doubled in the Golan Heights, calling it a “strategic goal.”

In his remarks on Monday, Bennett stated in six weeks his regime will present a plan to boost the population, including the construction of two new settler units, in the occupied region. The ultimate goal, he stressed, was to reach the population of 100,000 settlers, almost four times the current population of around 27,000.

In response, Syria reaffirmed its right to retake the occupied territory. In a statement, the Syrian Foreign Ministry announced the Golan Heights will “return in the arms of the motherland sooner or later,” hastening to add that there is “no other way.”

In an address to the meeting of the Non-Alignment Movement (NAM) on Monday, Syrian Foreign Minister Faisal Mikdad highlighted his country’s right to re-establish control over the Golan Heights. He noted Syria has “every right” to that end.

The top Syrian diplomat declared that Damascus will put in all efforts to reclaim its occupied territories and to combat terrorism, while lashing out at the United States, Turkey and the Israeli regime.

Earlier this week, Syrians rallied in the Golan Heights to protest the Israeli regime’s plan of constructing settler units and doubling the number of settlers in the area.

In 1967, Israel waged a full-scale war against Arab territories, during which it occupied a large swathe of Golan and annexed it four years later – a move never recognized by the international community.

In 1973, another war broke out; and a year later a UN-brokered ceasefire came into force, according to which Tel Aviv and Damascus agreed to separate their troops and create a buffer zone in the Heights. However, Israel has over the past several decades built dozens of illegal settlements in Golan in defiance of international calls for the regime to stop its illegal construction activities.

Syria has repeatedly reaffirmed its sovereignty over Golan, saying the territory must be completely restored to its control.

The United Nations has time and again emphasized Syria’s sovereignty over the territory.

In July, the United Nations Economic and Social Commission for Western Asia (ESCWA) announced in a report that it was impossible to achieve sustainable development in the occupied Palestinian territories in light of Israel’s unending occupation and the policies and practices it pursued.

“The compliance with the international law and the absence of impunity are two prerequisites for achieving peace and justice for all the peoples of the region,” the UN body added.

In March 2019, former US President Donald Trump signed a decree recognizing Israeli “sovereignty” over Golan during a meeting with former Israeli Premier Benjamin Netanyahu in Washington.

Many regional countries, including Iran, Turkey, Lebanon, Russia, in addition to the European Union were quick to reject and condemn Trump’s move.