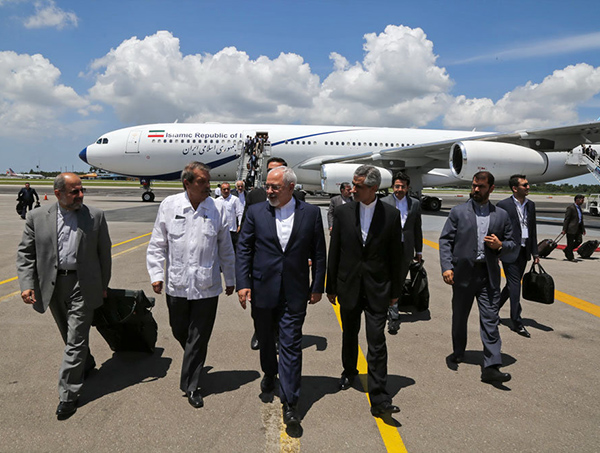 Speaking at a formal dinner ceremony at the Cuban capital of Havana’s Hotel Nacional de Cuba on Sunday night, the Iranian minister said all Iranian political missions across Latin America will help the country’s private and state sectors to interact with the countries in such “major part of the world” and press ahead with the current plans.

He also noted that the implementation of the Joint Comprehensive Plan of Action (JCPOA), a nuclear deal between Iran and the Group 5+1 (Russia, China, the US, Britain, France and Germany), has removed the obstacles and opened up opportunities for closer ties between Iran and the Latin American nations, Tasnim reported.

Zarif arrived in Cuba on Sunday as the first leg of a Latin America tour, which will take him later to Nicaragua, Ecuador, Chile, Bolivia and Venezuela.

Before landing in Havana, the Iranian minister said, “The Islamic Republic of Iran has had strong and age-old relations with the Americas and Latin American states and is determined to expand its relations with and political and economic presence in this important region of the world.”

“The composition of the delegation,” Zarif said, “is indicative of the significance that both the private and the state-run sectors of the Islamic Republic of Iran attach to the enhancement of relations with Latin America.”

The Iranian foreign minister said Iran’s private and state-run sectors have implemented several projects in Latin American countries over the past few years, and “the Islamic Republic of Iran has diplomatic relations with nearly all the counties in the region.”

Turning to the issue of the relations between Iran and Cuba — his first destination on the Latin American tour — the Iranian foreign minister said Iran stands with the Cuban government and nation, Press TV reported.

“Cubans have endured more than five decades of cruel US pressure and sanctions,” Zarif said, adding that even though US President Barack Obama recently paid a visit to Cuba, “the sanctions continue although they have been reduced a little.”

He also praised the biotechnological, scientific and medicinal cooperation between Iran and Cuba, expressing hope that interaction between the Iranian private sector and Cuba would further flourish in technical and engineering arenas.

Zarif is expected to sign several contracts in the fields of oil, energy and maritime transport in his tour.

His previous Latin America tour in May, took Zarif to Brazil, Nicaragua, Bolivia, Venezuela and Cuba.