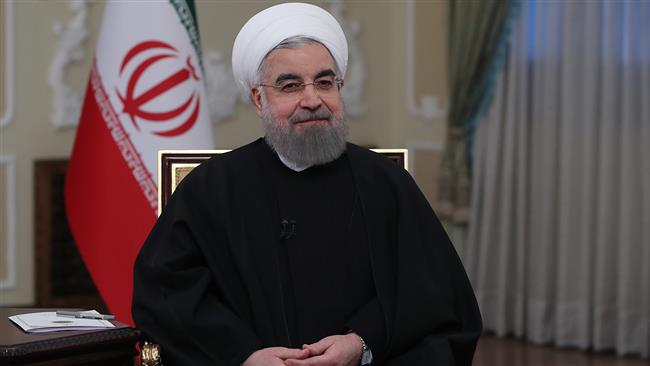 Iranian President Hassan Rouhani says terrorism is on the verge of ultimate defeat in the Middle East, stressing the complementary role of diplomacy and resistance in defeating terrorists.

Addressing the Iranian people in a live televised speech on Sunday, the Iranian president stressed the importance of fighting terrorism as a major threat to the entire region and the world.

He added that Iran enjoys “exceptional” security conditions in the Middle East, saying that the highest levels of security have prevailed across the country, even in its westernmost regions.

Rouhani said Iran has not withheld its support from any country demanding its assistance in the fight against terrorism, citing Iraq and Syria as instances.

The Iranian president added that the Islamic Republic is strongly opposed to any bid to partition countries in the region, in a clear reference to efforts made to divide Iraq, Syria and Yemen.

Rouhani said diplomacy is the final solution in crisis-hit countries, including Yemen and Syria, adding, however, that terrorism must be simultaneously countered on the battlefield.

He added that diplomacy and resistance are the two sides of the same coin, adding that Iran has been helping Syria on both fronts.

The Islamic Republic provided assistance to the Syrian army in the fight against terrorism and is also involved in the diplomatic efforts to resolve the conflict in the Arab country, the Iranian president said.

Rouhani expressed hope that the upcoming Syria peace talks in the capital of Kazakhstan, Astana, would be a positive step toward finding a diplomatic solution to the crisis in Syria.