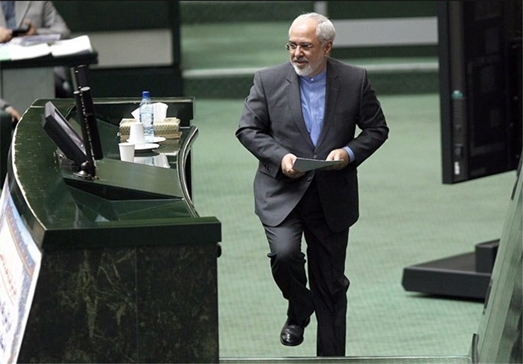 Iranian Foreign Minister Mohammad Javad Zarif plans to attend the 10th Parliament on Sunday for the first time and brief the newly-elected lawmakers on the process of implementing the July 2015 nuclear deal between Tehran and six world powers (also known as the JCPOA).

Speaking to the Tasnim, Mohammad Qasim Osmani, a member of Parliament’s presiding board, said according to the board’s decision, Zarif will attend an open session of the parliament on Sunday June 12 and brief the MPs on the Joint Comprehensive Plan of Action (JCPOA).

Osmani added that Zarif is also slated to answer to lawmakers’ questions about the impact of the JCPOA on the country’s economy.

Earlier in April, the previous Parliament’s National Security and Foreign Policy Commission received a report from the Foreign Ministry on the status of implementation of the JCPOA, the comprehensive 159-page deal on Tehran’s nuclear program, over the first three months after the implementation.

The accord took effect in January, terminating all nuclear-related sanctions against Iran.