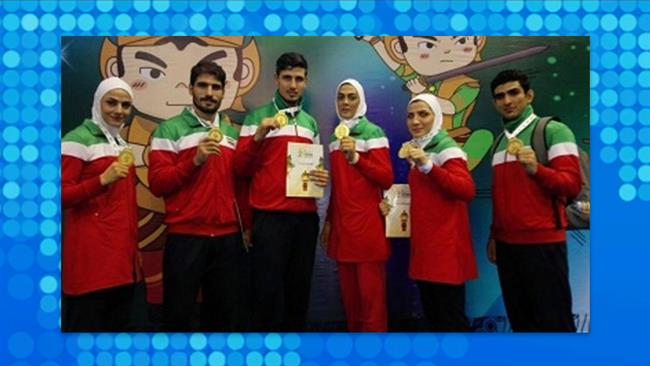 Iranian male and female wushu practitioners have ranked second in the 8th edition of the Sanda World Cup in China.

Having won four gold and three silver medals, the Islamic Republic of Iran stood behind China, with 10 gold medals.

The Philippines collected two gold, a silver and three bronze medals to secure the third place.

On Sunday, Iranian sportswoman Maryam Hashemi lost to a representative from China in the last contest of the women’s minus 70-kilogram category of the Sanda (sparring) discipline in the central Chinese city of Xi’an and received the silver medal.

Erfan Ahangarian also lost to by his Chinese opponent in the men’s minus 65-kilogram class, and won another silver for Iran.

In the men’s minus 70-kilogram category, Mohsen Mohammad Seifi prevailed over his Jordanian rival Ali al-Qaisi and got the gold medal.

Iran’s wushu artist Amir Fazli conceded a defeat to a Chinese athlete in the men’s minus 85-kilogram category and was awarded the silver medal.

Hamidreza Qolipour collected another gold medal for Iran in the men’s 85-kilogram category after his Romanian opponent did not show up for the final competition.

The achievements came a day after Shahrbanou Mansourian beat her Filipino opponent Hergie Bacyadan 2-1 in the final contest of the women’s minus 65-kilogram category.

Earlier on Saturday, Sedigheh Dariaeivarkadeh collected the gold medal in the women’s minus 60-kilogram section after defeating her Vietnamese opponent Nguyen Thi Trang.

Sanda, sometimes called Sanshou or Lei tai, has all the combat aspects of wushu, but includes many more grappling techniques.

The 8th edition of Sanda World Cup started in Xi’an, China, on November 4 and wrapped up on November 6, 2016. The international tournament brought together a total of 71 world champions from 19 countries, including Belarus, China, France, the Islamic Republic of Iran, Italy, Russia and Vietnam.

The Wushu Federation of the Islamic Republic of Iran had dispatched a seven-strong delegation to the contests.