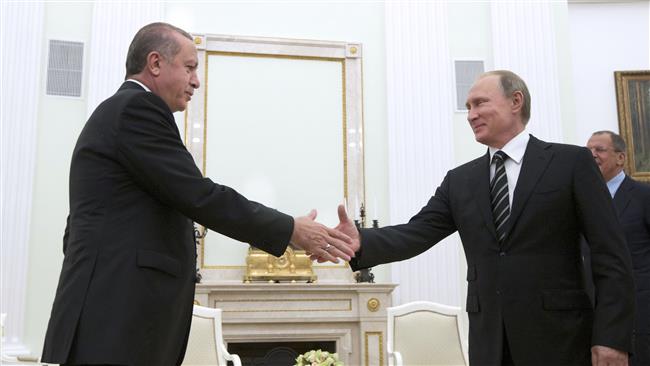 Iran has voiced full support for the normalization of Moscow-Ankara ties, which soured last year over Turkey’s downing of a Russian fighter jet, saying the rapprochement could benefit the entire region.

On Thursday, Iranian Foreign Ministry spokesman Bahram Qassemi said Tehran “welcomes the political will as well as measures taken by leaders of neighboring Turkey and Russia to mend their relations.”

Iran “hopes that normalized ties between the two countries would serve the interests of the Turkish and Russian nations as well as all people in the region,” he said.
The Iranian official also expressed hope that efforts to resume normal Turkey-Russia relations would bear fruit as soon as possible, saying such a political achievement could strengthen regional peace and cooperation as well as the fight against terrorism.

Last November, the Turkish military shot down a Russian Su-24 during an anti-terror mission in Syrian skies near the Turkish border.

The Russian fighter jet went down in the mountainous Jabal Turkmen area of the Syrian province of Latakia. The pilot lost his life in the crash, while Syrian government forces rescued the Russian navigator on board, who survived the crash.

Ankara claimed that the Russian jet had violated its airspace despite repeated warnings. Moscow, however, rejected the allegation, saying the aircraft remained in Syrian skies throughout its mission and received no warnings from the Turkish military.

Back then, Iran’s President Hassan Rouhani called for Russia and Turkey to show restraint in the aftermath of the incident, saying the two sides should follow up on the issue “with insight and prevent the recurrence of such incidents through prudence and patience.”

Turkey further angered Russia by refusing to apologize over the deadly incident, which Russian President Vladimir Putin described as a stab in the back.

In response, Russia slapped a series of sanctions on Turkey, saying the bans would not be lifted until Moscow received an apology from Ankara.

For the first time since the outbreak of the political crisis in Ankara-Moscow ties, Putin and his Turkish counterpart Recep Tayyip Erdogan held a phone conversation on Wednesday and agreed to meet in person.

The call came after the Kremlin said Putin had received a letter from Erdogan, in which he had apologized to his Russian counterpart over the incident.

Putin has ordered his government to start the process of normalizing trade ties with Turkey.