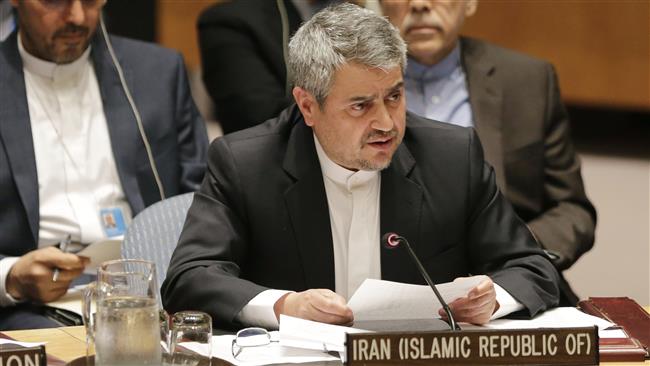 Tehran have submitted an official letter of complaint to the UN chief, protesting a recent US Congress vote in favor of extending an anti-Iran sanctions law, in a move viewed as a violation of Washington’s commitments under last year’s nuclear deal between Iran and the P5+1 group.

In the letter addressed to Secretary General Ban Ki-moon, Iran’s Ambassador to the United Nations Gholam-Ali Khoshrou wrote that the congressional move flew in the face of the US commitments, which have been enshrined in the accord, known as the Joint Comprehensive Plan of Action (JCPOA).

The US “is, therefore, answerable for any unfavorable consequences and pernicious effects that could result from the measure,” the letter said.

Khoshrou wrote that Washington, as a party to the JCPOA, has pledged to neither ratify nor prolong any nuclear-related bans against Tehran as any such move contradicts “the letter” of the deal inked in July 2015 between Iran and the the P5+1 group of countries, namely the US, the UK, France, Russia and China plus Germany.

The US Congress, however, voted recently to extend for another decade the president’s power to impose sanctions on the American entities that do business with the Islamic Republic under the so-called Iran Sanctions Act (ISA).

The law was first adopted in 1996 to punish investments in Iran over its nuclear program and support for anti-Israeli resistance groups. The ISA now needs President Barack Obama’s signature to turn into law.

Further in the letter, the senior Iranian diplomat also urged the UN chief to mention Washington’s non-commitment in his next report to the UN Security Council, which has endorsed the JCPOA to make it international law.

“The Islamic Republic’s government considers the Congress’ recent ratification, namely its extension of the ISA until the end of 2026, to be against US obligations as per the JCPOA,” Khoshrou wrote.

Khoshrou also urged the UN chief to press all concerned parties to live up to their contractual agreements.

Iranian authorities have slammed the congressional vote as a violation of the nuclear deal, vowing to adopt appropriate retaliatory measures.

On Tuesday, Iranian President Hassan Rouhani said a committee tasked with monitoring the JCPOA’s implementation is set to decide Wednesday how to respond to the ISA’s extension.