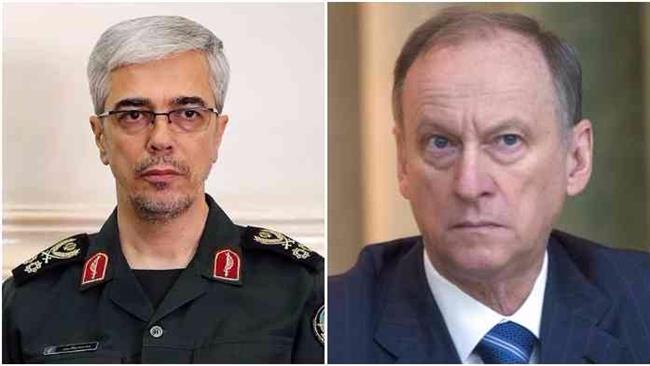 The military brass of Iran and Russia say the pre-planned US missile strikes against a Syrian airfield were a blatant attack on an independent country with the purpose of hindering its recent military gains and boosting the morale of terrorists and their allies.

Chief of Staff of the Iranian Armed Forces Major General Mohammad Baqeri and his Russian counterpart, Valery Vasilevich Gerasimov, held a phone call on Saturday after US warships in the eastern Mediterranean launched a barrage of 59 Tomahawk missiles against Shayrat Airfield in Syria’s Homs Province early on Friday.

Baqeri and Gerasimov expressed their countries’ resolve to fight Takfiri terrorism and vowed to step up anti-terror operations in cooperation with the Syrian government until the complete defeat of terrorists and their allies.

Also on Saturday, Secretary of Iran’s Supreme National Security Council (SNSC) Ali Shamkhani warned about the destabilizing impacts of the US aggressive and illegal moves in the Middle East, saying Iran and Russia would continue to strongly fight terrorism in the region.

“The path of firmly countering terrorism will continue through further strategic cooperation among Iran, Syria, Russia and the resistance front,” Shamkhani said in a phone conversation with Secretary of the Russian Federation Security Council Nikolai Patrushev.

He called for the formation of an independent international fact-finding committee to clarify various aspects of a gas attack in the Syrian town of Khan Shaykhun in Idlib Province which killed at least 86 people.

The SNSC secretary said Syria’s chemical weapons had been dismantled over the recent years under the supervision of the United Nations.

The chemical attack in Idlib has been definitely carried out by a “third party and with the purpose of creating a pretext to carry out a military attack on Syria,” Shamkhani said.

Anti-Damascus militants and Western countries rushed to blame Syrian President Bashar al-Assad for the tragedy in Idlib, without providing any evidence to support their accusations.

Syria has categorically denied carrying out the gas attack, with Foreign Minister Walid al-Muallem stressing that the Idlib airstrike had targeted a depot, where terrorists stored chemical weapons.

The senior Russian security official, for his part, condemned the US strikes against Syria as a blatant breach of international regulations and said the move would further help terrorists operating in the region.

Following Washington’s unprecedented offensive, a Russian Foreign Ministry statement said that Moscow was suspending the 2015 air safety agreement with Washington aimed at avoiding mid-air collisions during their military missions in the Syrian airspace.

Hours later, a US-led coalition spokesman confirmed that Russia had notified the alliance of its intent to halt the deal.

Russia has secured its Syrian bases in Hmeimim and Tartus with S-300 and S-400 missile defense systems.

Syria’s S-200 air defense systems have been restored with Russia’s help, TASS reported, adding that those complexes were also deployed to provide protection for the Russian military in eastern Syria.