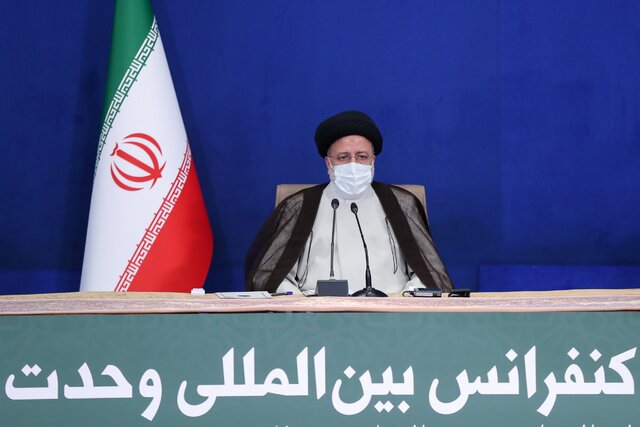 The Iranian president has urged Muslim nations to remain united and refrain from divisions.

“We seek to ensure stability in Islamic countries, unlike the enemy, which tries to create instability. We believe unity is the strategy that the Islamic community should adopt, but the enemy’s strategy is to sow discord,” said Ebrahim Raeisi in a keynote speech at the opening ceremony of the 35th International Conference on Islamic Unity in Tehran on Tuesday.

He said any move to disrupt unity will play into the hands of the enemy.

President Raeisi then noted that Palestine is the most pressing issue of the Muslim world, and should not be sidelined.

He said the ongoing conference is an ideal opportunity to further promote Islamic awakening, which has already emerged in the Muslim community.

“Islamic awakening, which came into being thanks to struggles and martyrs’ blood, should not lose momentum, and all of us should strive to protect and boost it,” President Raeisi explained.

He also urged Muslim states to stand up to conspiracies by enemies.

“Today, we are seeing the enemies of Islam trying to sow discord and hatching plots in all regional countries, namely in Iraq, Syria, Afghanistan, Lebanon and Yemen. All of us should try to protect the Muslim community against these conspiracies,” he said.

“Hegemonic powers seek to undermine Muslim countries’ elements of power by sowing suspicion and discord within the Islamic community using its media power,” he said, urging Muslims to stand up to enemy plots.

Raeisi also urged the Muslim world to stand up to terrorist groups such as Daesh.

He reiterated that corruption, poverty and terrorism should be eradicated from the Islamic world. President Raeisi also encouraged closer scientific, cultural and media cooperation among Muslim nations.

The 35th International Conference on Islamic Unity kicked off in Tehran on Tuesday.

The six-day event brings together Islamic thinkers and intellectuals from more than 50 countries, who will deliver speeches either in person or online.

The event is themed on Islamic unity, peace and refraining from discord and conflict in the Muslim world. Among the major topics on the agenda are fighting extremism and terrorism, mutual respect between different Islamic schools of thought, easing tensions and practical ways of achieving Islamic unity.