Iran does not need nukes, not now, not ever! 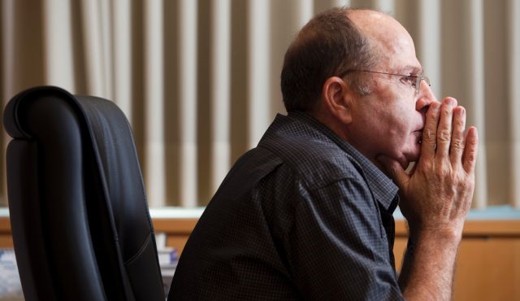 Recent remarks by the Israeli defense minister on the likelihood of nuking Iran are part of efforts to provoke the Iranian nation and pit them against their government, reads an IFP editorial.

A recent speech by Moshe Ya’alon in which the highest ranking Israeli military official invoked the US nuclear bombing of the Japanese cities of Hiroshima and Nagasaki toward the end of World War II to suggest that nukes could be an option when a decision is made on Iran carried a significant message for the Iranians.

He was seeking to pit the proud, patriotic Iranian people against the highest-ranking officials of the establishment prompting them to criticize government policies, and trigger a shift in the Islamic Republic of Iran’s defense strategy toward development of more military weapons. Conceivably, he was also trying to turn “development of nuclear bombs” into a “national demand” [of the Iranians]. Can anybody be more evil-minded than this?

Without doubt, he is certain that a decree by Iran’s highest-ranking religious official [Supreme Leader] Ayatollah Khamenei banning “the production, stockpiling and use of weapons of mass destruction, including nuclear bombs” will be subject to no change. Basically, the Supreme Leader’s decree is based on the Islamic teachings, not on public demands.

Moshe Ya’alon, however, seems to be seeking to provoke the Iranian nation, especially those individuals who have connections at the country’s [top] managerial levels and at the executive, legislative and judicial branches; those who think aggressive and pre-emptive measures in a battle are the best means of defense. Or [he has targeted] those who justify tit for tat (a bomb for a bomb) in taking on the enemies.

The motive behind the baseless remarks by this senior official of the Israeli regime is “to put a crimp [in the nuclear talks] from inside Iran” and sabotage the ongoing nuclear talks. By threatening to nuke Iran and invoking a fateful decision [back in 1945] by President Harry Truman which caused a [big nuclear] catastrophe in Japan and in the wider world (a catastrophe whose painful memories are still engraved in Japanese minds), Israel is trying to throw an obstacle – thanks to its hoped-for pressures from the inside – in the way of the Islamic Republic of Iran.

Israel struggles to make larger segments of the Iranian population insist on the need for continued nuclear activities on a scale larger than before (even if they have to pay a price: more economic pressure and continued unjust sanctions) instead of supporting the [diplomatic] settlement of the nuclear dispute with P5+1 and normalization of Iran’s ties with the West.

The Israeli military official is fully aware that yielding to such a demand – especially because it cannot be met unless the Supreme Leader’s religious decree is overridden – is a distant possibility. However it is not unlikely for a few low-ranking officials or some journalists who draw on national and patriotic zeal, or a hardline medium – even though in the form of an appeal to senior officials – to shout for the development of nuclear bombs (or at least for efforts to reduce the nuclear breakout time to less than a year).

Such a radical, unwise reaction [a call for nuclear bombs] can play into the hands of the Zionist regime of Israel to adopt obstructionist measures to prevent Iran from normalizing its ties with the international community.

The hawks in the Israeli government and the despotic Arab rulers are fearful of a developed Iran run by a government which has come to power through the ballot box. In this country [Iran], there should be no growing economy, no efficient civil society, no democracy, and no successful experience whatsoever; that is what they want.

These politicians are more concerned about a secure, developed and democratic Iran [which enjoys an Islamic-style democracy] than an “atomic Iran”. That’s why they [Israeli and Arab politicians] want to see Iran isolated for good.

Pledges by Arab officials who gathered at Camp David [for a summit with the US president earlier this month] to match Iran in nuclear capabilities are a step toward ratcheting up the pressures on Iran. They [Western politicians] know better than anybody else that for princes (numbered at around 4,000) military techniques and flying fighter jets, of course not F-35 jets, are the first priority.

Above all, [they are concerned about] a society in which people voluntarily go to battle fronts and put their lives on the line [for the sake of their homeland], and the country does not hire paid mercenary soldiers to manage its war (a case in point is Yemen where Saudi officials have been trying to recruit soldiers from Egypt, Pakistan, etc. to fight the Saudi war).

They have certainly realized that they cannot emerge victorious by throwing money at the problems. Knowledge can be bought, but mercenary scientists are not trustworthy, because there are always people [out there] who are willing to shell out more.

With the July 1 deadline approaching, efforts which aim to dampen the mood and resort to threatening rhetoric – either due to unawareness about ground realities in today’s world or because of intentional hostile attitudes – are launched simply to draw extreme reactions from inside Iran.

In the meantime, White House officials too have time and again fallen into the trap of the enemies of “a nuclear deal between Iran and P5+1”, and made acquisitive, oath-breaking and tenuous comments which put their efforts [to strike an agreement with Iran] at risk of breaking down.

Their comments [usually] make front-page headlines in Iranian newspapers which back constant confrontation with the West and highlight it as a strategic revolutionary obligation. These newspapers report that there are coordinated anti-Iran efforts by US officials, particularly the hawks, and Netanyahu. They tend to introduce the West, especially the US administration, as untrustworthy saying establishment of normalized ties with Washington seems highly unlikely. What they say is borne out by the conflicting remarks of US officials.

Apparently Western officials, especially the Americans who claim to be serving the greater good of the world, need to be honest with their own conscience and throw light on their stance in their privacy. Providing answers to the following questions would reveal what should be done:

Do they really want to see the world in peace? Is it possible to establish peace and calm in today’s interconnected and organic world without restoring peace and security in the Middle East? Is it possible to imagine a Middle East without Iran, which is a key player (courtesy of what they’ve witnessed within years and months, and thanks to what they know about Iran’s recent and distant history including a pre-Islamic Revolution Iran and the change from a monarchy to an Islamic Republic, and according to what they have read – since the start – about the role of Iran and the Persians in the course of human history)?

Is it possible to ignore Iran and Iranians in efforts to establish sustainable security and peace in the Middle East? Should Iran be involved [in efforts to restore security and calm to the Middle East] simply because it is “evil” and part of “an axis of evil” (as the former US president put it) or it should be included because it is powerful, selfless and patient when it comes to resisting the evil and countering evil-doers?

If the answer to the first question is in the affirmative and if those who claim to support human rights and democracy are really after peace and security (not necessarily for themselves which seems impossible and unachievable), their answers to the questions that follow the first one would be “no”, because global peace and security are tied to the peace and security in the Middle East. The latter becomes a reality if and when Iran – its people and [popular] government which has come to power thanks to the revolution –participate in such efforts in an active and highly motivated fashion.

The world needs Iran’s cooperation, either for removing the obstacles standing in the way of establishing peace and security or for ensuring and strengthening the peace and security of the world which direly needs a review of the principles and structures of its order from a fresh, culturally-rich perspective.

Iran’s culture and civilization has the potential. Take a look at the [Cylinder known to be the world’s first] charter of human rights by Cyrus the Great or take heed of the meaning of a poem by Saadi, Iran’s famous poet, which has become a fixture at the entrance to the United Nations building [The sons of Adam are limbs of each other; Having been created of one essence. When the calamity of time affects one limb; The other limbs cannot remain at rest. If thou hast no sympathy for the troubles of others; Thou art unworthy to be called by the name of a human] and you will admit that Iran’s cultural richness is no exaggeration.

The history of Islam following its debut in Iran has already witnessed cultural interactions between the Arab societies and the Iranians immediately after the dawn of the Islamic period. Iranians had vigilantly realized that the invading Arab tribes carried a valuable human message, although the messengers were bad-tempered and indecent.

As history has shown the world’s wise rulers rationally seize the unrepeatable opportunities which come their way to advance the [cause and] progress of human civilization and guide the world – even if one single step – toward the materialization of human dreams with flexibility, patience and farsightedness.

As a Persian proverb goes, “Silence is the right answer to the fool”. This editorial does not intend to respond to the baseless claims of Israeli Defense Minister Moshe Ya’alon. What he’s said is foolish and shows his criminal and racist nature. Rather, this is a reminder to those who can take a step toward peace and security in the world to seize the opportunity and see the conclusion of a comprehensive, sustainable agreement in nuclear talks as one such step (a big one) [toward global peace and security].

It is also a reminder to those who seek to be part of efforts to fulfill the dream of a world free of violence and mass destruction weapons – far from the traps laid by the hawks and unwise rulers in the Middle East and key decision-making centers in the countries involved in nuclear talks.

The world needs to enjoy peace and security as well as cultural contacts and human interactions so that it can eradicate poverty in all material and spiritual forms. The planet we are living on is on the verge of destruction despite what it has. Flowers, grass and trees do not grow in Hiroshima and Nagasaki. The one who plants the seeds of feud and hatred takes the world to the brink of death and annihilation.

Let’s not join the ranks of arrogant and ignorant enemies in the world. We are living in a world which is in need of wise management and in-depth understanding of the fact that the line between safe and unsafe atmosphere is blurred. This [the indistinguishability of safe and unsafe conditions] is one of the salient features of a borderless world.