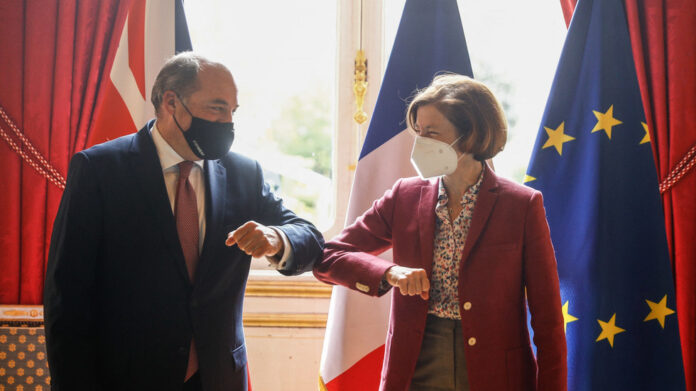 France has canceled a meeting between Armed Forces Minister Florence Parly and her British counterpart Ben Wallace planned for this week after Australia scrapped a submarine order with Paris in favour of a deal with Washington and London.

A Franco-British defense ministers’ summit due to take place this week has been canceled as Paris steps up its protests over the loss of a £48bn submarine contract with Australia and its secret replacement with nuclear technology from the UK and US.

Wallace, the UK defense secretary, and his opposite number, Parly, had been due to hold a bilateral meeting in London and to address the two-day Franco-British Council, now the latest casualties of the diplomatic row.

The council was also due to be attended by defense chiefs from both countries, the two largest military powers in western Europe. The co-chair Peter Ricketts, a former UK national security adviser, confirmed the elite gathering had been “postponed to a later date”.

Without the event going ahead, it is understood that Parly’s planned trip to London is deemed to have become redundant.

Earlier on Sunday, British sources announced they had hoped the meetings would proceed.

“We have a strong and close working defense partnership with the French as trusted allies,” one stated, listing joint counter-terror operations such as in Mali and Iraq as examples of the relationship between the two.

But Paris is incensed after Australia abandoned a lucrative but troubled contract for new diesel submarines with a French contractor to switch to the nuclear-powered alternative after six months of secret negotiations with the UK and US.

France recalled its ambassadors to the US and Australia over the weekend, plunging relations between the countries to an almost unheard of low. The cancellation of the defense summit demonstrates there will also be repercussions for the UK, which could yet deepen as the row continues.

Concern about the French reaction also prompted President Joe Biden to ask to talk to France’s Emmanuel Macron in an attempt to ease the dispute.

A French government spokesperson, Gabriel Attal, said, “President Biden asked to speak to the president of the republic and there will be a telephone discussion in the next few days between President Macron and President Biden.”

The escalating row also threatens to overshadow a trip to the US by Prime Minister Boris Johnson and his newly promoted foreign secretary, Liz Truss. Both will visit the UN general assembly, while Johnson is expected to visit the White House for the first time as prime minister to meet Biden.

On Sunday night, Johnson insisted “our French friends” should not worry about the controversial Aukus defense pact, noting, “Our love of France is ineradicable.”

He added, “We are very, very proud of our relationship with France and it is of huge importance to this country. It is a very friendly relationship – an entente cordial – that goes back a century or more and it absolutely vital for us.”

Although Macron had not been due to attend the annual world leaders gathering, Truss will have to face his foreign minister, Jean-Yves Le Drian, at a meeting of the UN security council on Tuesday.

Le Drian, considered close to Macron, has been vocal in denouncing the submarine deal, describing it as a “stab in the back” and accusing those involved of engaging in “duplicity, contempt and lies” over the past few months.

France is particularly unhappy that in bilateral and other meetings over the last few months, ministers from the three countries gave no indication of what was being planned, with some diplomatic sources saying the feeling of anger and betrayal in Paris is still being underestimated.

British defense sources argued that it was left to the Australians to break the news to the French, but it seemed there were divisions in Canberra about the best way of going about it.

“Some Australians wanted to ring up one week and say we’re so sorry, we’re putting out the diesel submarine contract, and ring up the next week and say we just want you to know that we found a better submarine and it’s British,” the defense source said, adding, “There was another school of thought that said: don’t do it like that. They’ll see through it and it will be worse because it will look duplicitous.”

In the end, neither side won. The French were not told before details began to leak to the Australian and US media on Wednesday morning.

The UK has argued that it was simply responding to a request from Australia to seek secret nuclear propulsion technology for its submarines in March this year, technology shared between Britain and the US under a defense agreement that dates back to 1958.

The defense source noted that having secured British support, the Australians then went to the Biden administration.

But the claim of relative British passivity is undermined by other briefings from Downing Street, which have said that Johnson was eager to widen the nuclear submarine deal into something deeper in the aftermath of Brexit.

The three countries also announced Aukus, a defense technology pact, in which they confirmed they would work together on sharing breakthroughs in areas such as artificial intelligence and quantum computing. The nuclear propulsion deal was the first instance of that, the three added.