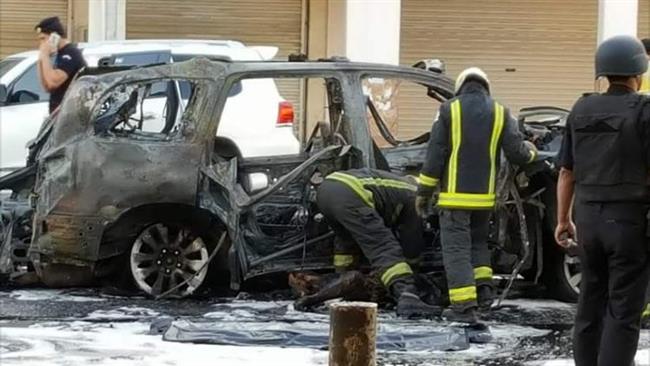 A car bomb has exploded in the predominantly Shia city of Qatif in Saudi Arabia's Eastern Province, with initial reports of casualties.

The blast took place on Thursday, Saudi-owned Al-Arabiya television reported, without giving any details on casualties.

Sources affiliated to Saudi Shia Muslims said two people were killed in the bombing that happened near Qatif’s Sheikh Hussein al-Omran Mosque. They said the explosive-packed car went off after it came under RPG fire.

“The explosion was very huge,” a witness told AFP, adding that armored and other police vehicles sealed off the scene of the bombing after the explosion.

Videos and photos posted on social media showed a vehicle engulfed in flames and black smoke rising around it. There were also images showing at least one charred body lying beside the vehicle.

No group has claimed responsibility for the attack yet.

Daesh terrorists have killed more than 40 Shia Muslims since the Takfiri group began a campaign of bombings and shootings in Eastern Province in 2014.

Qatif has witnessed anti-regime protests since 2011, with demonstrators demanding free speech, release of political prisoners, and an end to economic and religious discrimination.

The government has responded to the protests with a heavy-handed crackdown but the rallies have intensified since January 2016 when Saudi Arabia executed respected Shia cleric Sheikh Nimr al-Nimr.