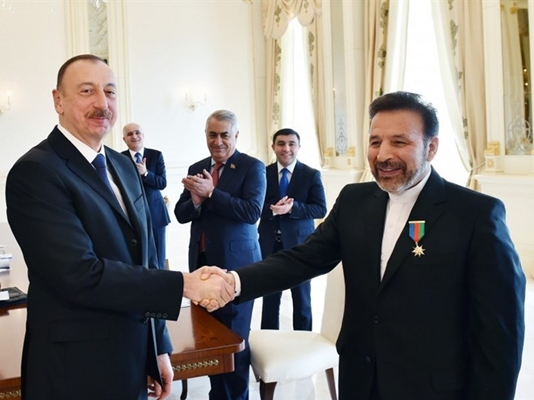 The Republic of Azerbaijan’s President Ilham Aliyev described an upcoming visit to Baku by his Iranian counterpart as a sign of amicable and growing relations between the two Muslim neighbors.

Such high-profile reciprocal visits signify perfect relations between Iran and Azerbaijan, he added.

The Iranian president is expected to visit Baku in the next few days to attend a trilateral meeting with Aliyev and Russian President Vladimir Putin.

Elsewhere in the meeting, the Azeri president and the Iranian minister discussed political and economic cooperation between the two nations in diverse fields, including oil and gas industry, transportation, investment, banking, agriculture and tourism.

Vaezi, who chairs Iran-Azerbaijan Joint Economic Commission, arrived in Baku on Tuesday to prepare the ground for President Rouhani’s visit.

Back in February, Aliyev paid an official visit to Tehran, during which the two sides signed eleven Memorandums of Understanding (MoUs) and agreements to promote mutual cooperation in a range of fields.