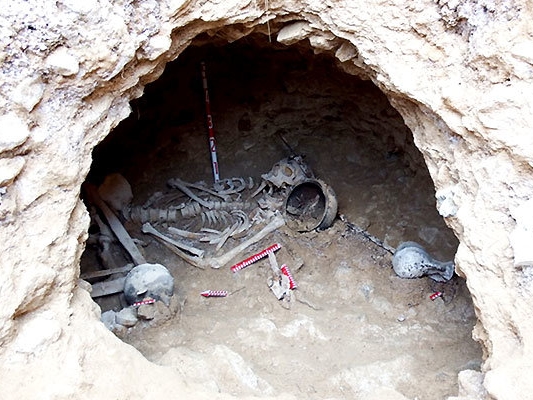 The second season of field research on an ancient settlement and cemetery in the northern Iranian city of Amlash, Gilan province, led to the discovery of 14 graves dating back to Parthian and Sassanid eras.

Vali Jahani, the leader of the archaeological mission to Amlash, said the second season of emergency excavation on the settlement site and cemetery of Amlash County began on May 6 with the aim of saving cultural artefacts, and will continue until July 28.

The ancient site was first identified in 2013, Jahani said, adding, “The exploration led to the discovery of funerary objects and stone architecture whose historical periods are still unknown to archaeologists.”

At the five excavation workshops on the graveyard located at the easternmost part of the ancient site, 14 pits and cellar graves have been discovered, probably dating back to Parthian and Sassanid eras.

“In the residential-settlement part of the site located on the north side, we also found evidence of stone architecture and residential spaces,” he added.

He went on to say that further research is needed for a definite opinion about the exact cultural period of these funerary and residential objects.