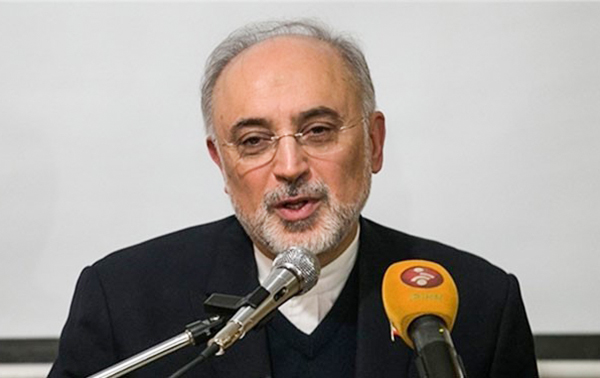 Head of the Atomic Energy Organization of Iran (AEOI) Ali Akbar Salehi announced that Tehran and the European Union have held good discussions on nuclear cooperation and are now able to launch joint venture at Fordo uranium enrichment plant in Central Iran.

“Various talks and visits have been made between Iran and certain European states after the nuclear deal and this time we are witnessing the presence of an EU delegation within this framework,” Salehi told reporters after meeting the EU energy commissioner in Tehran on Sunday.

“We have held good talks with the EU delegation on nuclear cooperation which can start from the Fordo site,” he added.

Salehi also said that Tehran and the EU have decided to set up an advanced nuclear center in Iran to provide the country and neighbors with related services.

His remarks came after Iranian Foreign Minister Mohammad Javad Zarif announced that cooperation between Tehran and the European Union in the field of peaceful nuclear technology is among the important issues pursued during EU Foreign Policy Chief Federica Mogherini’s visit to Tehran.

Fields of “cooperation (between Iran and the EU) envisaged in the nuclear deal (between Tehran and the world powers), including cooperation in civilian nuclear industry, will be discussed between the EU energy commissioner and Head of the Atomic Energy Organization of Iran (AEOI) Dr. (Ali Akbar) Salehi” during the EU delegation’s current visit, Zarif said in a joint press conference with Mogherini in Tehran on Saturday.

In relevant remarks last Monday, AEOI Spokesman Behrouz Kamalvandi announced that Tehran and the European Union are due to ink a document to increase cooperation in the field of civilian nuclear technology.

“Cooperation (with other countries) has started in practice and we have exchanged delegations with the EU, China, South Korea, Japan, the far East and countries which enjoy nuclear technology, whose number is not so high; we will interact with all of them and a document is due to be endorsed with the EU which is being compiled,” Kamalvandi said.

Noting that signing a deal with the EU means agreement with all its members, he said the details of the document will be announced after endorsement.

Kamalvandi said that any agreement with the EU includes mutual cooperation and interaction.

“The AEOI has presented a 15-year-long plan for Research and Development (R&D) and enrichment to the International Atomic Energy Agency (IAEA) and we want to reach the stage to build at least one nuclear power plant every 15 years,” he said.

“After this stage, we will have a better opportunity in different fields, including increasing the number of power plants, and we are in talks with different countries to attain this goal,” Kamalvandi added.

Late August, Salehi had announced that the country is compiling a 15-year-long plan to further expand its peaceful nuclear know-how and capabilities.

“A 15-year-long plan is being compiled and the plan will be reviewed every 5 years,” Salehi said, addressing a ceremony at Fordo nuclear site near the Central city of Qom.

“One of our plans is to move on the path of commercialization and we hope to gain success in this arena,” he added.

Also in the same month, President Hassan Rouhani announced that Iran would commercialize nuclear technology as soon as the nuclear agreement comes into practice in near future.

“Our nuclear program has been recognized in the Resolution 2231 and world powers are eager to cooperate with us in this regard,” Rouhani told reporters.

The president added that the Islamic Republic plans to export enriched UF6 and import yellow cake from abroad.

He elaborated that Iran will bring modern technology through cooperation with two countries of the Group 5+1 (the US, China, Russia, France and Britain plus Germany).