US, Regional Allies Lack will to Uproot Terrorism: Iran’s Larijani 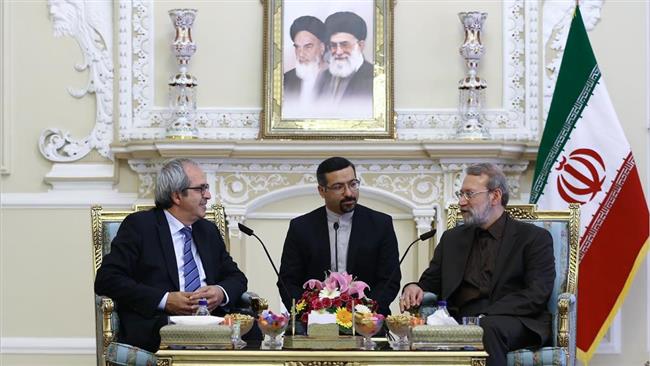 Iranian Parliament Speaker Ali Larijani has lashed out at the United States and its regional allies for using terrorism as a means to achieve goals, saying they lack the determination to annihilate this dangerous phenomenon.

“Unfortunately, the US along with some of its regional allies is using the phenomenon of terrorism as a tool and does not have the necessary resolve to eradicate this ominous and dangerous phenomenon,” Larijani said in a meeting with a senior member of Belgium’s Parliamentary Assembly Dirk Van der Maelen in Tehran on Sunday.

He added that some countries’ support for the terrorist Jabhat Fateh al-Sham, formerly known as al-Nusra Front, in Syria is very dangerous and “can further complicate the situation in Syria and the entire region.”

The foreign-sponsored conflict in Syria, which started in March 2011, has claimed the lives of more than 400,000 people, according to a UN estimate.

A ceasefire, brokered by the US and Russia in Syria, expired on September 19 after being in place for only a week. Damascus refused to extend it after US-led airstrikes killed over 80 of its soldiers and wounded some 100 others at a military base in the eastern province of Dayr al-Zawr in violation of the truce.

The senior Belgian parliamentarian, for his part, said his country opposes the killing of innocent people in Palestine, Syria, Yemen and other regional countries.

Like Iran, Belgium believes that regional issues must be settled through political approaches and dialogue, Van Der Maelen added.

He said direct consultations between Tehran and Brussels on mutual and regional issues are very important and can help restore peace to the region.

Meanwhile, a senior advisor to Leader of the Islamic Revolution Ayatollah Seyyed Ali Khamenei said on Sunday that respect for Syrian people’s will and the country’s territorial integrity is the key solution to the crisis in the Arab country.

“Syria will never be divided and the only solution to the Syrian crisis is [based on] respecting the people’s national will and protecting the country’s territorial integrity,” the Leader’s advisor on international affairs, Ali Akbar Velayati, said in a meeting with Van der Maelen.

He added that countries that are supporting terrorism and those, which have created Takfiri and terrorist groups in the region, have now found themselves in a predicament from which they cannot easily escape.

He added that the US made a “big mistake” in Dayr al-Zawr, where it only killed innocent people.

On September 17, a Syrian army air base in Dayr al-Zawr came under attack by US-led warplanes in violation of a nationwide ceasefire deal, which had been mediated by Russia and the US.

More than 80 Syrian soldiers lost their lives and some 100 others were wounded in the US-led airstrikes, which helped Daesh terrorists make some gains in the area.