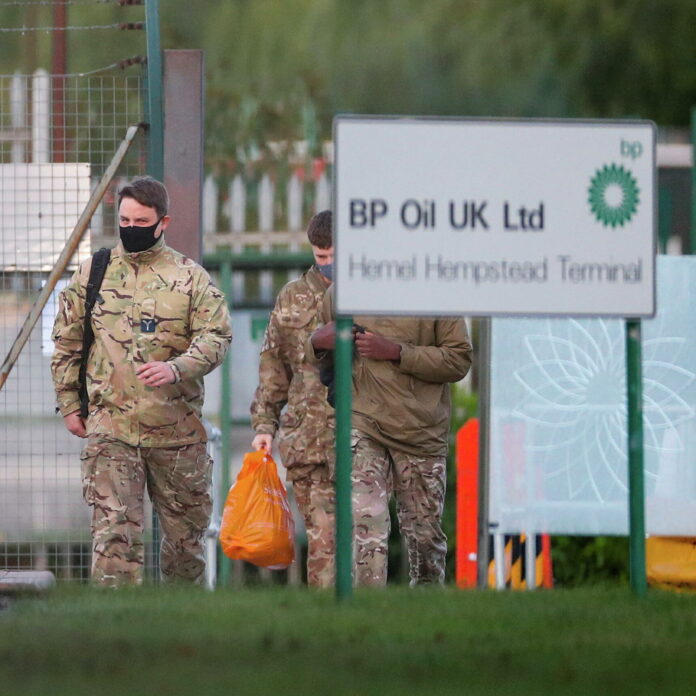 British military personnel have started delivering fuel to petrol stations across the United Kingdom in an effort to ease the crisis arising from a shortage in lorry drivers.

Military personnel have started delivering fuel to petrol stations for the first time in a bid to tackle the ongoing supply crisis caused by a shortage of heavy goods vehicle (HGV) drivers and panic buying.

About 200 military personnel, half of them tanker drivers, have hit the road under Operation Escalin, to deliver fuel to forecourts across the country.

The troops, who have been on standby since last week, are expected to “fill in any critical vacancies and help keep the country on the move” ahead of Christmas, the UK government announced on Friday.

While the government believes that the demand for fuel across the UK has stabilised, military personnel are concentrated in London and the South of England as the recovery rate has been “slightly slower”.

“We are working closely with industry to help increase fuel stocks and there are signs of improvement in average forecourt stocks across the UK with demand continuing to stabilise,” a government spokesperson was quoted as saying by Press Association (PA).

“Stocks in London and the South of England have been recovering at slightly slower rates than other parts of the UK, so we have begun deploying military personnel to boost supply in these areas,” the spokesperson added.

“More than half of those who have completed training to make fuel deliveries are being deployed to terminals serving London and the South-East of England, demonstrating that the sector is allocating drivers to areas most affected in this first phase from Monday,” the spokesperson noted.

The announcement for troop deployment came after Sir Keir Starmer warned that prime minister Boris Johnson’s failure to “get a grip” of the HGV driver shortage is threatening to ruin the festive season.

The move was welcomed by the Petrol Retailers Association (PRA), which represents independent retailers. PRA chairman Brian Madderson, however, stated that while the use of the military would be a “large help”, it would have a “limited impact” in hard-hit areas.

“This isn’t going to be the major panacea”, he added.

He said that while there had been an improvement in the north of England and Scotland, fuel shortages remain a “really big problem” in London and the southeast, stating, “If anything, it had got worse.”

In an interview with Sky News, he added that a survey done by his organisation on Saturday revealed that one in five has no fuel.

The government on Friday also announced a U-turn on its emergency visa scheme as it extended it by two months for nearly 5,000 foreign food haulage drivers. The visas were due to expire on 24 December but have now been extended until the end of February.

Johnson, who was attending the opening day of the Tory Party conference in Manchester on Sunday, repeatedly refused to rule out shortages in the wider economy in the run up to Christmas, even as he argued that the crisis was “abating” and that the military were being deployed as “precaution”.

The prime minister acknowledged that the country is going through a “period of adjustment” following Brexit, as it has cut off the supply of labour from the European Union.