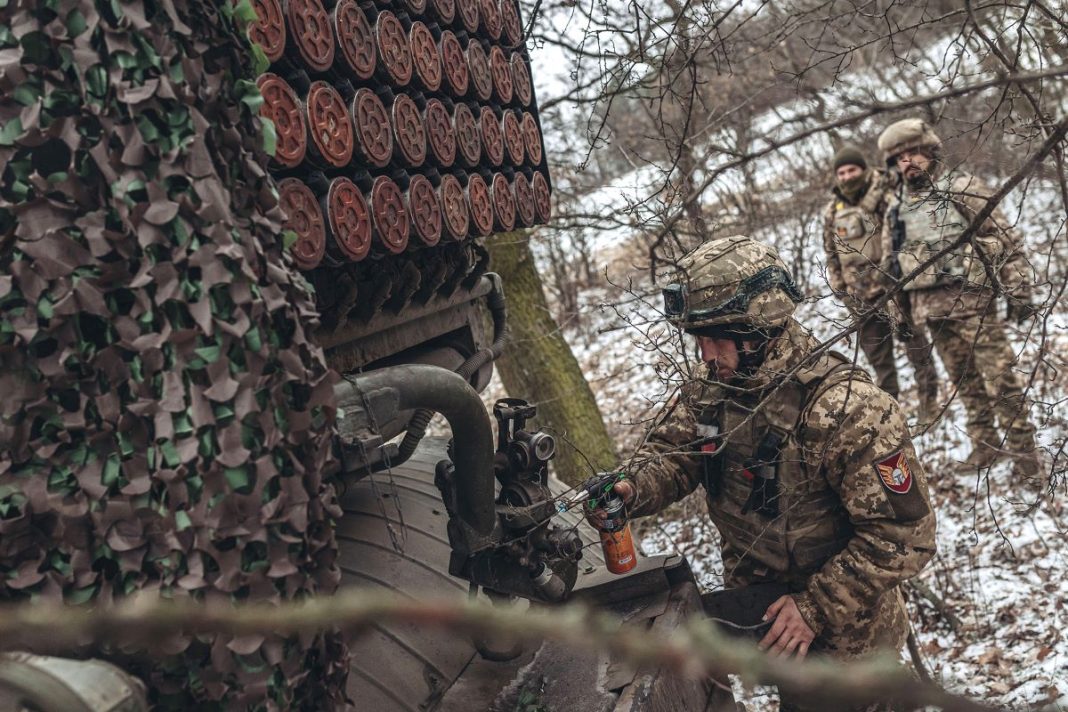 “We are convinced that pre-accession negotiations should begin as soon as possible after Ukraine has implemented the recommendations and the positive assessment of the European Commission,” Kuleba stated in an online speech at an EU Foreign Affairs Council meeting in Brussels.

“Ukraine is making every effort, and I am convinced that we should start pre-accession negotiations by the end of 2023,” he added.

Russian Foreign Minister Sergey Lavrov says the terms of the Black Sea grain initiative, which clears the way for Ukrainian grain to be exported from its southern Black Sea ports, were “more or less being fulfilled”.

However, when speaking at a news conference during a visit to South Africa, Lavrov stated that Russia still faced problems exporting its agricultural products.

Lavrov noted the longer Ukraine rejects peace talks, the harder it will be to resolve the conflict.

Russia has repeatedly said it is open to talks, but Ukraine and the US say they see no sign that Moscow is serious about ending the war and instead suspect it of trying to buy time to regroup.

“The longer they [the Ukrainians] refuse, the harder it will be to find a solution,” Lavrov added.

EU countries and their partners must do everything possible to ensure Ukraine wins against Russia, German Foreign Minister Annalena Baerbock noted.

“It’s important that we as an international community do everything we can to defend Ukraine, so that Ukraine wins and wins the right to live in peace and freedom again,” Baerbock stated before a meeting of EU foreign ministers.

Baerbock declined to make any specific comment on the sought-after Leopold 2 tanks.

Sanctions on the Wagner group will have no effect: Kremlin

The Kremlin dismisses US sanctions on the Wagner Group, saying they will have no practical effect.

“I don’t think that in practical terms it has any significance for our country, and even less for the Wagner private military company (PMC),” Kremlin spokesman Dmitry Peskov told reporters.

The White House announced on Friday that the mercenary group would be designated a significant Transnational Criminal Organisation and that new sanctions against it would be announced this week.

Wagner founder Yevgeny Prigozhin wrote to the US national security spokesperson John Kirby to “clarify what crime was committed by PMC Wagner?”

The agency said in a statement that US-supplied HIMARS rocket launchers, air defence systems and artillery ammunition had been delivered to the Rivne Nuclear Power Plant in the northwestern city of Varash.

“The Ukrainian armed forces are storing weapons and ammunition provided by the West on the territory of nuclear power plants,” the agency announced, adding that an arms shipment to the Rivne power station had taken place in the last week of December.

Warsaw is building a coalition of nations ready to send Leopards, but even if there is no permission from Berlin, Warsaw will make its own decisions, he added.

“Even if, eventually, we do not get this permission, we – within this small coalition – even if Germany is not in this coalition, we will hand over our tanks, together with the others, to Ukraine,” he noted.

German Foreign Minister Annalena Baerbock stated on Sunday that Poland hasn’t formally asked for Berlin’s approval, but “if we were asked, we would not stand in the way.”

This decision was made in solidarity with Estonia, and it will go into effect on Feb. 24, he added.

The move comes after Moscow downgraded its diplomatic relations with Estonia and expelled the Estonian ambassador over allegations of “Russophobia.”

The Russian Foreign Ministry has ordered the Estonian envoy to leave next month. Both countries would be represented by an interim charge d’affaires instead of an ambassador.

“In recent years, the Estonian leadership has purposefully destroyed the entire range of relations with Russia. Total Russophobia, the cultivation of hostility towards our country have been elevated by Tallinn to the rank of state policy,” it announced.

The move was in response to an Estonian decision to reduce the size of the Russian embassy in Tallinn, added Moscow.

Zelensky: Independence will be lost if true unity is not attained

Ukrainian President Volodymyr Zelenskyy stated that his country’s independence will be gone if it is not able to attain true unity.

“If the struggle is not stopped, sooner or later a unified and independent state will be restored,” Zelensky said in a video address on the occasion of the Day of Unity.

“If true unity is not attained, independence will be lost. We have always known about the first piece of wisdom. And on February 24, we proved that we had mastered the second.”

At the start of Moscow’s war, Ukrainian unity was revived, he added.

“Every region is protecting each other. All of us no longer have strange cities, villages, or streets. Every city is a native city. Every village is a native village. Every street is a native street. Even if we have never been there in our life,” Zelensky noted.

A senior Ukrainian official in the east of the country says the armed forces are in control of current positions but that “moving forward is very difficult” because the Russians have brought up substantial reserves.

Serhiy Hayday, head of the Luhansk Regional Military Administration, told Ukrainian television, “Very fierce fighting continues in our Luhansk region. It is difficult. But the situation is absolutely stable and controlled by the Armed Forces of Ukraine.”

Referring to the north-south frontline running between Svatove and Kreminna, Hayday stated, “Moving forward there is very difficult because the occupiers have brought up huge reserves. And as I have said many times before — everything is very thoroughly mined there.”

But he added, “No matter how difficult it is, the Luhansk region is being de-occupied step by step, meter by meter.”

Hayday said the Russians had several layers of defensive lines in the region. “The first line is mostly [held by] recently mobilized, either from Russia or the so-called LDPR [Luhansk People’s Republic.”

He added that Chechen forces were in the area as well as Russian regular forces.

“There are huge numbers of them [Russian troops in the Svatove-Kreminna area]. And a very large number of mobilized. And they are constantly being thrown into the offensive – almost all the time….And the huge problem is that there are just an incredible number of them. That is why every meter of the Luhansk region is extremely difficult to gain,” the official continued.

Ukrainian forces have been trying to advance towards Kreminna, which would allow them to threaten the Russian-held cities of Lysychansk and Severodonetsk, for weeks. But they are still thought to be several kilometers outside the town.

“The meeting in Ramstein [Air Base in Germany] and the allocation of heavy weapons to Kyiv leave no doubt that our enemies will indefinitely try to wear us down, or better, destroy us. And they have enough weapons. If necessary, they will start producing new ones. Therefore, there is no need for illusions,” Medvedev said in a message on Telegram.

He added that the conclusion that can be drawn from this, in addition to it being a difficult situation, is that a new military alliance will be formed by the United States and its allies in the event of a protracted conflict.

The former UK PM was seen taking notes when touring Borodianka, which the Russians occupied for a month at the start of the war. Questioned by Johnson about how many of those who’d fled the town had returned, Kuleba said the population is back to about 60% of what it was before the war.

Johnson visited an exhibition dedicated to the Bucha massacre, laid flowers at a mass grave site and said that “the UK will be sticking by Ukraine for as long as it takes.”

He also met with Ukrainian President Volodymyr Zelensky in Kyiv to pledge his ongoing support and ask how he could help Ukraine.

Johnson informed Zelensky about his visit to Borodianka and Bucha earlier that day, describing what he saw as “appalling.”

Zelensky thanked Johnson, who visited the country several times during his time as premier, for his support in a Telegram post calling him “a true friend of Ukraine.”

Johnson became one of Ukraine’s most vocal supporters during his tenure, and was seen as a special ally in Kyiv.

He was one of the first foreign leaders to visit the Ukrainian capital back in early April and returned twice more while still the British PM — in June and in August for Ukraine’s Independence Day.

Johnson said the availability of modern weapons in the Ukrainian army will not lead to an escalation of war with Russia, in a Sunday address to students and professors at Taras Shevchenko National University of Kyiv.

“Do not listen to the arguments of those who talk about escalation. People worry in the west that things are going to escalate if we give Ukraine the weapons,” Johnson continued, adding, “I was in Bucha. How can we escalate the confrontation, where one side is already using the most advanced modern aircraft to bomb residential areas? Ukraine deserves all the help possible.”

Johnson went on to say that Ukraine should “seek its destiny in NATO” because it not being in NATO “has led to the worst war in Europe in the past 80 years.”

Johnson said the whole world “owes Ukraine a debt,” because it is fighting for everybody who can potentially become “a victim of Vladimir Putin’s aggression.” He added Ukraine “fights for freedom around the world” and that the British people support Ukraine “a 100%.”

According to Johnson, it is necessary to provide Ukraine with all the necessary weapons as soon as possible to end the war.

“This means we must provide tanks. I’m proud that we are the first country to send Challenger tanks, and we expect tanks from other countries. We want to get aircraft for the people of Ukraine, and we need better equipment, weapons of all kinds that will enable you to defend your country,” the former prime minister noted.