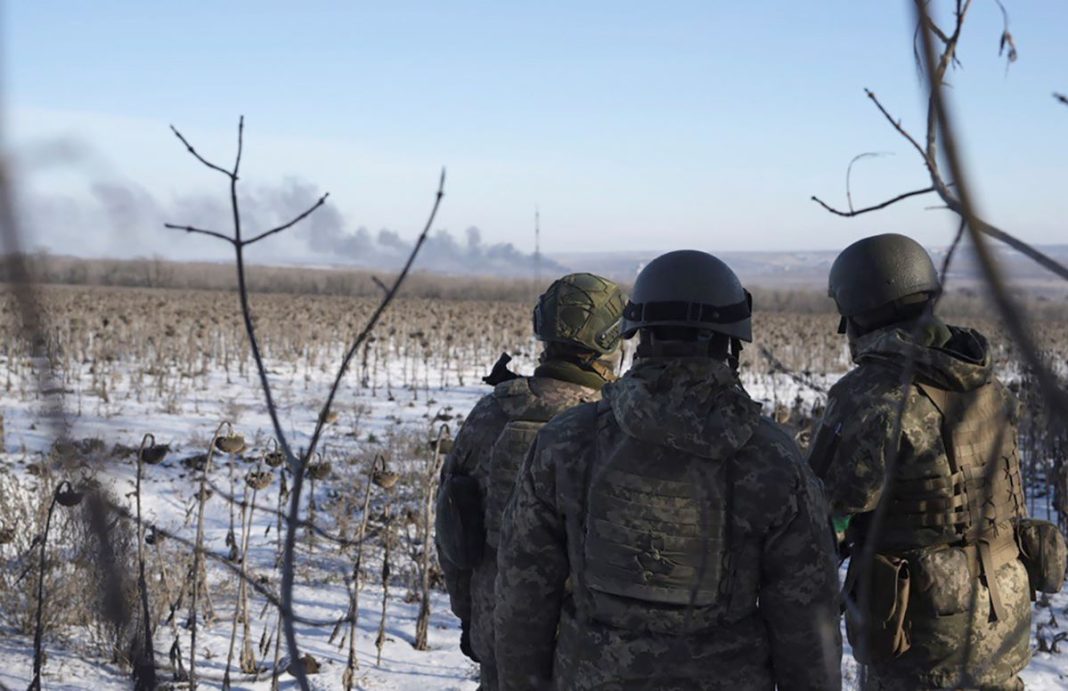 Ukrainian officials have claimed that a strike on a Russian position near the town of Soledar in eastern Ukraine has killed 100 enemy soldiers.

In a statement published Thursday, the Special Operations Forces of the Armed Forces of Ukraine said it had detected a “concentration of the enemy,” and employed artillery and a Soviet-designed missile system to carry out the attack.

“As a result of these several strikes, the destruction of more than 100 occupiers, two machine gun crews and two mortar crews was confirmed,” Ukraine’s military stated, praising the work of its “Special Forces warriors, artillerymen and rocketeers.”

In recent weeks Ukraine has claimed a number of attacks which it says have killed large numbers of Russian soldiers.

The General Staff of the Armed Forces of Ukraine announced around 500 Russian troops were either killed or wounded in a hit near Chulakivka, a town in Ukraine’s southern Kherson region, on New Year’s Eve.

However both Ukraine and Russia acknowledged a strike that took place just after midnight on New Year’s Day on a vocational school housing Russian conscripts in Makiivka, eastern Ukraine.

The Russian Ministry of Defense reported 89 Russian servicemen were killed in the strike, whereas the Ukrainian military reported higher figures, initially claiming up to around 400 Russian soldiers were killed.

Russia is building up its forces in Ukraine but Kyiv’s troops are holding out in fierce fighting for control of the eastern town of Soledar, Ukraine’s deputy defence minister has stated.

Hanna Malyar told a news briefing that the number of Russian military units in Ukraine had risen to 280 from 250 a week earlier.

“They [the Russians] are moving over their own corpses,” Malyar said of the fighting for Soledar, which Wagner Group mercenaries have been fighting to take control of for weeks.

“Russia is driving its own people to the slaughter by the thousands, but we are holding on,” she added.

A spokeswoman for Russia’s foreign ministry has questioned whether Sweden has “something to hide” over blasts along the Nord Stream gas pipelines last September.

Addressing reporters at a news briefing, Maria Zakharova also reiterated criticism of the Swedish government for not sharing information from the ongoing investigations into the incidents.

Sweden and other European investigators say the attacks were carried out on purpose, but they have not said who they think was responsible. Moscow, without providing evidence, has blamed the explosions on Western sabotage.

“Maybe Russian investigators, conducting an objective investigation, could come to an inconvenient conclusion … about who conducted this act of sabotage, terrorism. About who thought it up, and who carried it out,” Zakharova stated.

Russia’s foreign ministry says Moscow has imposed sanctions on 36 individuals in connection with the “anti-Russian course” adopted by the United Kingdom’s government.

The list includes politicians, security officials and journalists, the ministry announced in a statement.

“Deliberately refusing constructive and constructive dialogue, London continues the line of confrontation, in collaboration with Washington, and spreads false information about Russia, [and] incites Russophobia,” it added.

The UK and its Western allies have rolled out sweeping sanctions on Russia over its offensive in Ukraine – measures which Moscow has persistently railed against.

The appointment of Gerasimov over Surovikin is “highly likely to have been in part a political decision to reassert the primacy of the Russian [ministry of defence] in an internal Russian power struggle,” the Institute for the Study of War has said.

Wagner Group chief Yevgeny Prigozhin had increasingly criticised the ministry’s conduct of the war since late 2022.

“Surovikin, the previous theater commander in Ukraine, was a public favorite of Prigozhin, and Ukrainian intelligence reported Surovikin is a rival of Russian Defense Minister Sergei Shoigu,” the Washington-based think tank announced in its latest assessment.

Gerasimov’s nomination is likely “a signal for Prigozhin and other actors to reduce their criticism” of the ministry, it added.

Human Rights Watch has hailed the international response to Russia’s invasion of Ukraine, urging governments to show the same concern for civilians caught up in other conflicts.

“Never in the history of responding to conflicts have we seen a coordinated international response where we have all the arsenal of the international community to protect human rights and ensure accountability,” HRW announced in its annual report.

The Washington-based watchdog urged governments to “replicate the best of the international response in Ukraine” and “scale up the political will to address other crises”.

A total of 7,967,409 Ukrainian refugees have arrived in European countries since Russia launched its special military operation, the Office of the United Nations High Commissioner for Refugees (UNHCR) announced.

According to the information available to the UNHCR, the number has increased by 52,122 over the past week.

According to the UNHCR, 17,408,643 people have arrived in neighboring countries from Ukraine since February 24. At the same time, 9,376,677 people crossed the border into Ukraine.

Russia sees its attempted capture of the contested eastern Ukrainian town of Soledar as a propaganda tool with which to maintain domestic support for its war effort, President Volodymyr Zelensky said Wednesday.

“Now the terrorist state and its propagandists are trying to pretend that some part of our city of Soledar – a city that was almost completely destroyed by the occupiers – is allegedly some kind of Russia’s achievement,” he stated.

“They will present – and are already presenting – this to their society in such a way as to support mobilization and to give hope to those who support aggression,” the president added.

“The Donetsk direction is holding out. And we do everything, without stopping for a single day, to strengthen Ukrainian defense. Our potential is growing. And I thank all our partners who help in this,” he added.

Forces belonging to Russia’s Wagner group found the body of one of two British voluntary workers who had been reported missing in eastern Ukraine, the group announced in a statement.

It did not mention the name of the dead man but said documents belonging to both Britons had been found on his body.

A photo posted alongside the statement appeared to show passports bearing the names of Andrew Bagshaw and Christopher Parry, the two missing men.

The British government is working with partners to discuss how to go “further and faster” in supporting Ukraine, including the provision of tanks, according to the prime minister’s spokesperson on Wednesday.

When asked by lobby journalists if the United Kingdom would supply tanks to Ukraine, the prime minister’s spokesperson said, “We are accelerating our support to Ukraine with the kind of next-generation military technology that will help them win this war.”

“It is clear that tanks could provide a game-changing capability to the Ukrainians and the prime minister told President Volodymyr Zelensky last week that we’ll provide whatever support we can,” the spokesperson added.

“The prime minister has asked the Defence Secretary to work with partners in the coming weeks to discuss how we can go further and faster on our support to Ukraine including the provision of tanks,” the official continued.

But, while it is “constantly looking at what equipment we can provide,” that does not mean that any decisions have been made about providing Challenger 2 tanks right now, the spokesperson stated.

Poland is ready to send Leopard tanks to Ukraine that Kyiv requested, Polish President Andrzej Duda announced on a visit to the western Ukrainian city of Lviv.

Warsaw is willing to deliver the tanks “within the framework of an international coalition”, Duda said after meeting his Ukrainian and Lithuanian counterparts

“As you know, there are a number of formal conditions that have to be met … but most of all, we want this to be an international coalition,” Duda stated, adding that he is counting on other countries to contribute to deliveries.

Any decision by Poland to send German-made Leopard tanks to Ukraine would require the green light from Berlin.

Brokering a deal on a safe zone around Ukraine’s Russian-controlled Zaporizhzhia nuclear power plant is getting harder because of the involvement of the military in talks, the head of the United Nations nuclear watchdog has said.

“I don’t believe that [an agreement] is impossible, but it is not an easy negotiation,” International Atomic Energy Agency (IAEA) Director General Rafael Grossi stated in an interview with Italian public television RAI.

Grossi, who previously said he hoped to broker a deal on protecting the plant before the end of 2022, noted talks with Kyiv and Moscow had become more complicated because they involve not just diplomats, but also military officers.

“It has become … a longer and more difficult [negotiating] table,” added Grossi, who was speaking in Italian.

Gerasimov replaces Sergei Surovikin, who had been appointed to the role on Oct. 8, 2022, and was in charge of Russian forces during their retreat from large swaths of Ukraine’s Kherson region. Surovikin will now serve as a deputy commander, according to a statement from the Russian Defense Ministry.

“Chief of General Staff General of the Army Valery Gerasimov has been assigned the commander of the Joint Group of Forces,” it added.

The ministry said that the changes were necessary because of “the amplified range of tasks, the necessity of closer cooperation between services and branches of the Armed Forces, as well as of improving the quality of all types of maintenance and efficiency of commanding the groups of forces.”