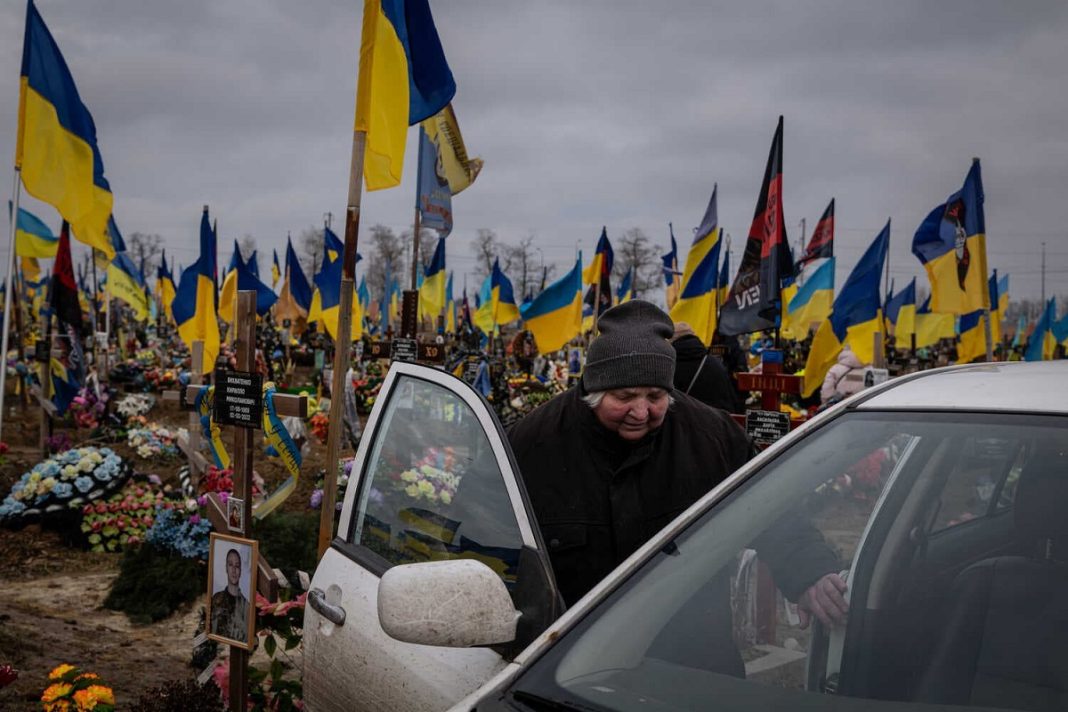 Russian authorities have banned the use of Ukraine’s national currency in four regions Russia formally annexed in September, the US-based Institute for the Study of War has said.

All transactions in Donetsk, Luhansk, Kherson and Zaporizhia will have to be tendered in the Russian ruble, the think tank added.

NATO countries will discuss their defence spending targets in the coming months as some of them call for turning a 2 percent target into a minimum figure, NATO Secretary General Jens Stoltenberg told the German news agency DPA.

“Some allies are strongly in favour of turning the current 2 percent target into a minimum,” DPA quoted Stoltenberg as saying.

He did not specify which NATO countries were calling for a more ambitious target.

Stoltenberg stated that he would head the negotiations: “We will meet, we will have ministerial meetings, we will have talks in capitals.”

The British defence ministry has announced it is unlikely Russian forces will achieve a “significant breakthrough near Bakhmut in the coming weeks.”

Russian troops and Wagner Group mercenaries increased their attacks in recent weeks, but many of these operations were “poorly supported,” the ministry said in its latest intelligence update.

Bakhmut, an embattled city in the country’s east, has seen fierce fighting as Moscow seeks to capture the entirety of the Donetsk region.

“We have information that Russia is planning a prolonged attack with Shaheds. Its bet may be on exhaustion,” Zelensky said in his nightly address Monday.

“On exhaustion of our people, our air defense, our energy sector,” he added.

The president stated that Ukraine’s main task is to ensure Russia’s drone plans fail. He noted more than 80 have been shot down over Ukraine since the start of 2023.

“This number may increase in the near future. Because these weeks the nights can be quite restless. Now is the time when everyone involved in the protection of the sky should be especially attentive,” Zelensky continued.

Forty percent of territories occupied after Feb. 24 — when Russia launched its invasion of Ukraine — were liberated over the past year, Commander-in-Chief of the Ukrainian Armed Forces, Gen. Valery Zaluzhny, said Monday.

The current frontline is 1,500 km long, the general added.

According to Zaluzhny, Ukrainian Armed Forces have undergone military training in the territory of 17 European countries.

“Thanks to international partners it was possible to train more than 20,000 soldiers,” he said, adding, “In 2022, more than 600,000 people were evacuated from the areas of hostilities and more than 2 million tonnes of humanitarian goods were brought in.”

Number of deaths in Russian-held city of Makiivka is “being clarified”: Ukrainian military

The Ukrainian military said the number of Russian servicemen killed in Makiivka, in Russian-occupied eastern Ukraine, is “being clarified.”

In its latest operational update Monday, the military’s General Staff reported that “up to 10 units of enemy military equipment of various types were destroyed and damaged in the area.”

Earlier, the Ukrainian military claimed that around 400 Russian soldiers were killed and a further 300 were wounded, without directly acknowledging a role.

The Russian Ministry of Defense on Monday acknowledged the attack and claimed that “63 Russian servicemen” died.

According to both Ukrainian and pro-Russian accounts, the strike took place just after midnight on Sunday, New Year’s Day, on a vocational school housing Russian conscripts in Makiivka, in the Donetsk region.

Meanwhile, Ukraine shot down 27 Russian-launched drones targeting civilian infrastructure on Monday, according to the General Staff.

“The enemy, losing a lot of manpower, continues to focus on conducting offensive actions in the Bakhmut direction and is trying to improve the tactical situation in the Kupyansk and Avdiivka direction,” the update noted.

“In the Kherson direction, the enemy continues shelling the settlements along the right bank of the Dnipro River. In particular, civilian infrastructure of Kherson, Antonivka and Beryslav suffered from artillery shelling. There are wounded among the civilian population,” the General Staff added.

“Millions of hectares of nature preserves are under threat. Article 55 of the Protocol I [Protection of Victims of International Armed Conflicts] prohibits waging war VS the natural environment by way of reprisals, but Russia doesn’t care,” he tweeted, referencing a 1977 amendment protocol to the Geneva Conventions.

Ukraine’s Ministry of Environmental Protection and Natural Resources said in a Facebook post Monday, “The conduct of hostilities deepens the climate crisis, causing significant emissions of carbon dioxide and other greenhouse gases into the atmosphere.”

According to the latest calculations of the Ministry of Environment, the war has directly led to emissions of 33 million tonnes of greenhouse gases. The ministry broke that figure down, listing the estimated emissions from combat, the movement of internally displaced people and fires in the country.

In May last year, CNN reported how Ukraine’s fertile soil was becoming contaminated with heavy metals and other potentially poisonous substances leaking from missiles, military equipment and spent ammunition.

Spilled fuel is polluting ground waters and ecosystems are being hammered by tanks and other heavy technology. All of this is damage that will be felt for decades after the war ends.

In December, Kyiv-based non-profit the Center for Environmental Initiatives Ecoaction published a report that said, “the population’s access to water in many regions of the country has significantly deteriorated”.

“As a result of Russia’s armed military aggression against Ukraine, water treatment and purification infrastructure facilities are destroyed, and environmental components are polluted, in particular sources of drinking water and water bodies,” it added.

IMF: Half of EU to be in recession due to Ukraine war

The head of the International Monetary Fund, Kristalina Georgieva, has said that half of the 27-nation European Union will be in recession in 2023 as the bloc is “very severely hit” by the Ukraine conflict.

“We expect one-third of the world economy to be in recession,” Georgieva stated.

The upcoming year will be “tougher than the year we leave behind” for the world economy, she added.

“Why? Because the three big economies, US, EU, China, are all slowing down simultaneously,” she told CBS’s Face the Nation programme.

Europe’s wholesale natural gas prices have fallen to their lowest level since Russia invaded Ukraine 10 months ago and drove gas prices to a record high.

Gas exports by the Russian energy giant Gazprom to the European Union and Switzerland fell by 55 percent last year because of sanctions on Russia.

European nations feared Russia could cut off gas supplies, so they filled up their gas storage tanks and encouraged consumers to save on energy during the winter. European storage levels are at 83 percent capacity, reducing the need to buy more gas.

EU nations have also adopted a cap on natural gas prices, but analysts say it will likely have a limited impact on what businesses and households pay.