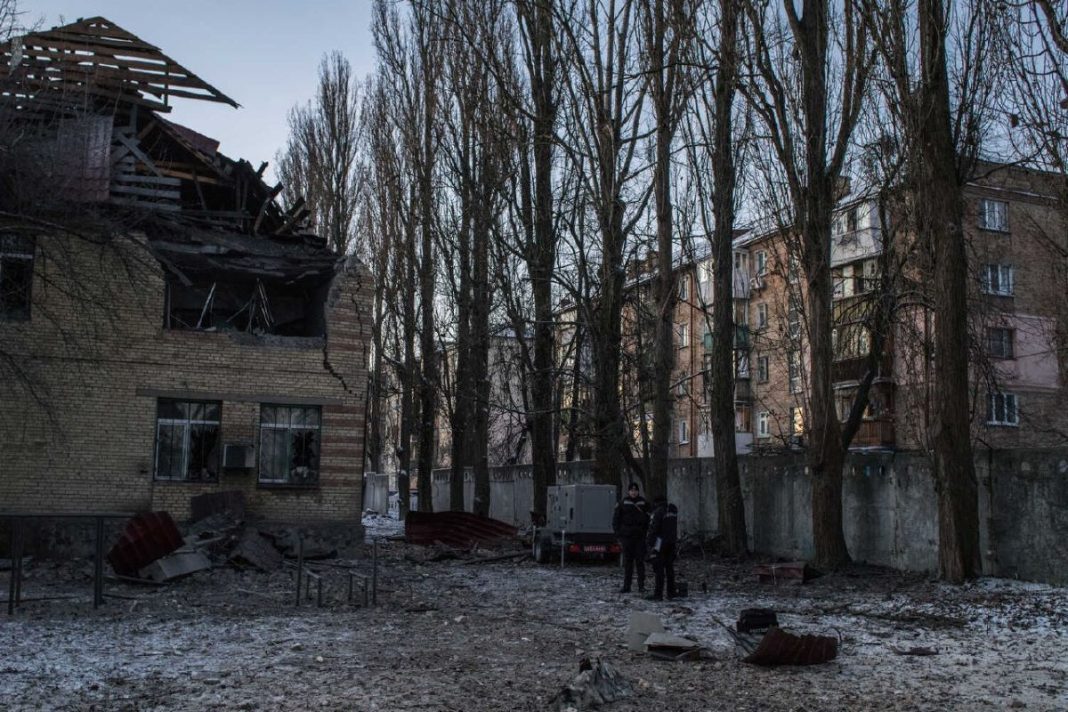 The ninth package of sanctions imposed by the European Union against Russia this week will only add to the EU’s social and economic woes, Russian Foreign Ministry spokeswoman Maria Zakharova stated Saturday.

“EU leaders are unable to break the vicious circle of restrictions and admit that all anti-Russia sanctions and the policy of pressure have failed. The new package will have the same effect as the previous ones: It will exacerbate social and economic problems in the EU itself,” Zakharova said in a statement.

She added the EU’s unreasonable behavior had led to energy shortages and rampant inflation across Europe and risked subverting its industrial progress.

The spokeswoman called the United States the key beneficiary of European sanctions against Russia and argued that emerging economies in Africa, Asia and Latin America had suffered disproportionately. Russia has repeatedly called on the EU to avoid measures that curbed Russian food and fertilizer exports.

Zakharova noted Brussels should take “comprehensive rather than cosmetic steps to allow for legal exclusion from the sanctions package of restrictions that affect the supply of grain, fertilizers and commodities either directly or indirectly.”

The EU, together with Britain and the US, sanctioned Russia after Moscow launched its special operation in Ukraine in February. In December, the EU also joined the G7 decision to set a price cap on Russian oil at $60 per barrel, and rolled out its ninths sanctions package against Russia.

Zelensky admits he is being nudged to negotiate with Russia

Ukrainian President Volodymyr Zelensky admitted in an interview to France’s LCI television channel he is being nudged to negotiate with Moscow.

“There are those who are urging me to sit at the negotiating table,” he said, adding, “But I don’t see anything to discuss.”

Zelensky had to backtrack on his earlier claim about the impossibility of talks with Russian President Vladimir Putin’s governent “due to soft nudging by the Joe Biden administration,” the Politico newspaper wrote last month citing own sources.

According to the paper, Zelensky made no mention of impossibility of talks with Putin when he listed the five preconditions for talks with Moscow earlier that month.

The article added the change in the Kiev government’s position occurred after lengthy talks between Kiev and Washington, including during a visit to Kiev by the US president’s national security adviser Jake Sullivan.

Earlier, Russian Foreign Minister Sergey Lavrov said that the Russian leadership stood ready to continue negotiations on Ukraine. He noted that Russia was ready to hear out its Western colleagues if they put forward a proposal to organize a dialogue on reducing tensions, taking into account Moscow’s interests. Kremlin spokesman Dmitry Peskov also suggested that talks on Ukraine should be conducted above all with Washington since Kiev is acting “on external orders.”

The Kremlin announced that President Vladimir Putin held meetings with Russia’s armed forces commanders on Friday to disuss its mlitary campaign in Ukraine during a visit to the operation’s headquarters.

A statement by the Kremlin read, “On Friday, the president spent the whole day at the army staff involved in the special military operation in Ukraine.”

The Russian leader met with his defence minister, Sergei Shoigu, and chief of general staff, Valery Gerasimov, and held “separate discussions with commanders” from different defence branches, it added.

In video footage released by the Kremlin, Putin is seen presiding at the meeting of around a dozen people at a circular table, flanked by Shoigu and Gerasimov.

He was also filmed at the head of another conference table at the joint taskforce headquarters, inviting suggestions from a number of military commanders.

Putin stated, “We will listen to the commanders in each operational direction, and I would like to hear your proposals on our immediate and medium-term actions.”

“Whatever the rocket worshipers from Moscow are counting on, it still won’t change the balance of power in this war,” he stated.

“These cruel, inhumane attacks aim to increase human suffering and deprive Ukrainian people, but also hospitals, emergency services and other critical services of electricity, heating and water,” said Borrell in a statement.

“These bombings constitute war crimes and are barbaric. All those responsible shall be held accountable,” he added.

CIA director Bill Burns said Friday he believes Russia’s attacks against Ukraine’s infrastructure will continue, although the agency does anticipate a “reduced tempo” of fighting through the winter.

For now, the CIA does not see an immediate path to negotiations to end the conflict, he stated.

“It’s not our assessment that the Russians are serious at this point about a real negotiation,” Burns told PBS’s Judy Woodruff in an interview.

Since October, Russia has launched a series of strikes that have damaged the energy system and civilian infrastructure, causing power outages in the freezing winter. On Friday, missile attacks were reported across Ukraine, including in Kyiv, Odesa, Kharkiv and Zaporizhzhia.

Burns noted that Russian President Vladimir Putin’s war in Ukraine has been a failure for the invading country, whose military, he said, “has performed poorly and suffered huge losses”.

“The Russian economy has suffered long-term damage. Most of the progress that the Russian middle class has made over the last 30 years is being destroyed,” he continued.

“The Russian population seems increasingly uneasy about the costs of war as well,” the CIA director added.

Russia’s goal is to leave Ukrainians without light, water or heat: Ukraine’s PM

Ukrainian Prime Minister Denys Shmyhal issued a dire warning at a government meeting Friday after a fresh round of Russian strikes battered the nation’s infrastructure.

“They have set a goal to leave Ukrainians without light, water and heat,” Shmyhal said, adding, “The world should definitely respond to these actions of Russia with quick and decisive steps.”

The prime minister claimed that air defenses shot down 60 of the 76 missiles from the barrage.

“We thank the defenders of the Ukrainian sky for this,” Shmyhal said.

But some of the missiles that did find their intended targets hit high-voltage substations and electricity generators, the prime minister added.

“Once again there is a serious shortage in the power system,” Shmyhal told attendees at the meeting, noting, “And now emergency blackouts are applied almost throughout the country.”

Oleh Syniehubov, a leader in the northeastern Kharkiv region, said on Telegram that engineers have started to restore electricity to Kharkiv city and more than half a dozen surrounding towns, including Izium.

Andrii Raykovych, who is head of the Kirovohrad region’s military administration in central Ukraine, stated power had been restored to more than 30% of local consumers.

“First of all, critical infrastructure facilities, medical institutions are being supplied with electricity. Then — the houses,” he explained.

Only one-third of Kyiv residents have water and heat after Russian strikes Friday: Mayor

Officials in Ukraine’s capital are working to get the power back to the majority of residents after the city was hit with a series of Russian missile strikes Friday, according to Mayor Vitalii Klitschko.

Only one-third of people have water and heat, and about 40% of people have power, he said in a post on Telegram. The outages are due to damaged power grids, Klitschko added.

“City services are working to return heat and water to all residents of the capital by morning. Power engineers are working to stabilize the power supply system,” he continued.

The city’s subway system has been closed and emergency power cuts are in force in the region.

“Tomorrow, additional buses will be launched in the capital to duplicate tram routes. In addition, the city will organize the movement of buses that will partially duplicate subway routes,” Klitschko stated.

Oleksiy Kuleba, head of the Kyiv region military administration, noted one person was seriously injured in the strikes.

Rescuers continue to search for an infant boy buried in the rubble of an apartment block in Kryvyi Rih, Ukraine, which was struck by a Russian missile Friday, killing three people and wounding over a dozen others, according to officials.

Among the dead were the 20-month-old boy’s parents, Kryvyi Rih’s deputy mayor Serhiy Miliutin told CNN. Their relatives have been informed of their passing, he added.

An unnamed 64-year-old woman was also killed, Oleksandr Vilkul, head of the Kryvyi Rih city military administration, wrote on Telegram. He also added that the couple were in their 30’s.

Thirteen people, including four children, were injured, Vilkul added, with a seven-year-old child among three people wounded who are in a “severe condition.”

He continued that more than 100 people lived in the apartment block.

“Residents of this and neighboring houses, which have damage, are accommodated in the Temporary Accommodation Centers. They are getting everything they need,” he said, noting, “Emergency crews from all over the city are eliminating the consequences of damage in neighboring buildings — these are 30 houses, a school and a hospital. People will not be left without help.”

The city in southern Ukraine was among the hardest hit in the latest wave of Russian missile attacks, officials said.

“All their targets today are civilians, and these are mainly energy and heat supply facilities,” Ukrainian President Volodymyr Zelensky said Friday in his nightly address.

At least 76 Russian missiles were fired at Ukraine: Armed forces

Preliminary data from Friday’s wave of Russian missile attacks against Ukraine suggests at 76 missiles were fired, according to Valeriy Zaluzhny, commander in chief of the Armed Forces of Ukraine.

The origin of the missiles were from the Caspian and Black Seas.