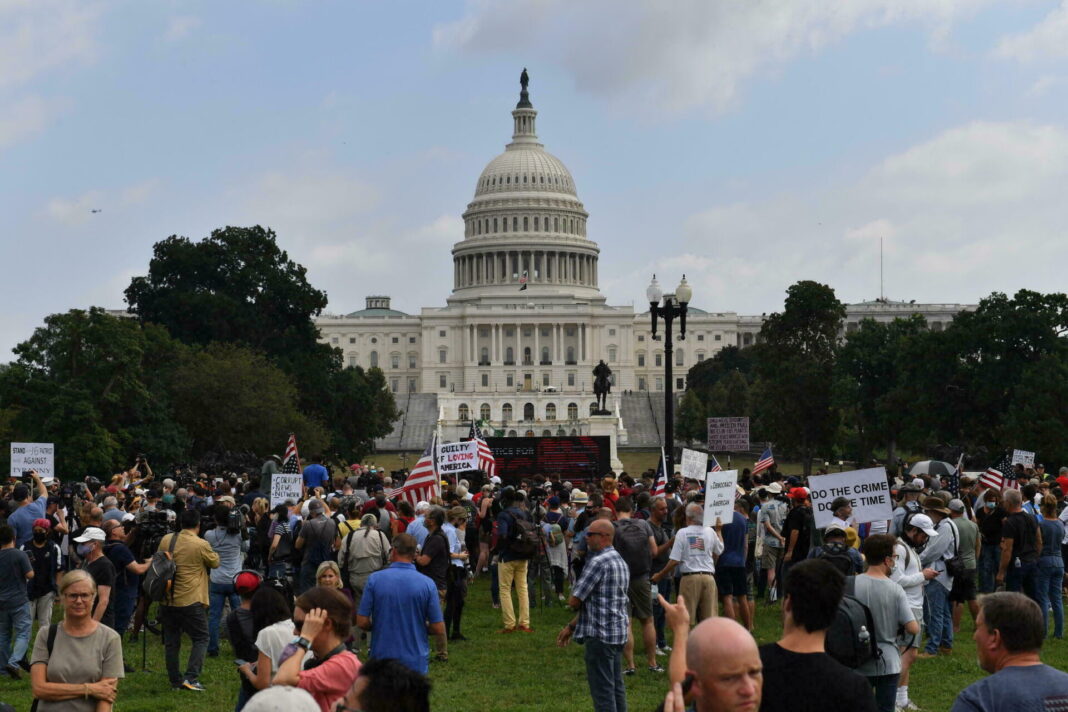 Several hundred demonstrators gathered outside the Capitol in Washington on Saturday to protest what the organizers say is the unfair treatment of people charged in connection with the deadly January riot at the US congress.

The rally ended less than 90 minutes after it began around noon in Union Square, a small park just west, and in clear view, of the Capitol.

Metropolitan Police Chief Robert Contee said that the crowd was “about what we expected” and that the stepped-up police presence may have kept numbers lower.

“I’m hopeful that had some impact on it,” he added in an interview before the rally.

In the afternoon, the U.S. Capitol Police estimated that, excluding law enforcement, 400 to 450 people were inside the protest area.

Matt Braynard, executive director of Look Ahead America and the organizer of the event, wrote on Twitter that he expected “a 100 percent peaceful event in support of the nonviolent offenders…who have been charged”.

Speaking to the crowd Saturday, Braynard noted that “this isn’t about President [Donald] Trump or [Joe] Biden or your political party. It’s about human rights and civil rights”.

More than 600 people have been arrested in the eight-plus months since the Jan. 6 attack, more than 50 of whom have pleaded guilty to a variety of federal crimes. Six have been found guilty in court, according to the Justice Department.

Law enforcement officers wore riot gear during the rally in case of any violence, equipment that many officers didn’t have on Jan. 6.

By Saturday afternoon, the Capitol Police had announced four arrests. During a traffic stop Saturday morning, two people were taken into custody on felony warrants out of Texas.

About 40 minutes into the event Saturday, USCP reported that officers had arrested a man who had a knife, for a weapons violation.

The other arrest took place around 1:30 p.m., police said, when someone saw what appeared to be a handgun on a man in the crowd. He was detained and charged with unlawful activities.

Law enforcement agencies coordinated their response to the demonstration in an attempt to avoid the chaos of the Jan. 6 attack on the Capitol. Authorities were also organizing a police presence at events planned in other parts of Washington on Saturday, including an annual street festival northeast of the Capitol.

Authorities had erected fencing earlier in the week around the Capitol and the Supreme Court, conducted “tabletop” rehearsals to plan for combating violence, and vowed that police would be visible across the city.

Trump, who was impeached by the House in January for his role in inciting the violence, stated Thursday that rioters have been “persecuted” by the Justice Department.

“Our hearts and minds are with the people being persecuted so unfairly relating to the January 6th protest concerning the Rigged Presidential Election,” Trump announced in a statement, adding, “In addition to everything else, it has proven conclusively that we are a two-tiered system of justice. In the end, however, JUSTICE WILL PREVAIL!”

But the former president, who was acquitted by the Senate, and other Republican officials are keeping their distance from the rallies. Neither he nor any member of Congress attended the protest in Washington.