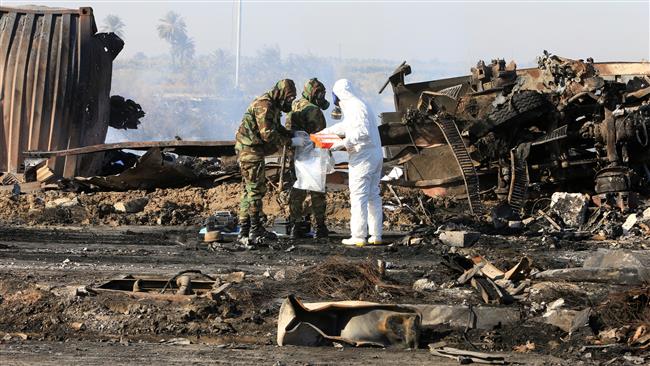 Iranian Parliament Speaker Ali Larijani has strongly condemned a recent terrorist attack in Iraq which killed hundreds of Shia pilgrims, mostly Iranians, stressing that Tehran and Baghdad are more determined than ever to fight terrorism.

“Terrorists and their supporters must know that the Islamic Republic of Iran will continue with its constructive and effective measures to fight terrorism,” Larijani said in a message on Friday.

“Such crimes will make Tehran and Baghdad more resolved in their battle against terrorism and extremism,” he added.

The top Iranian parliamentarian expressed his sympathy to the families of the victims.

About 100 people, most of them Shia Iranian pilgrims, were killed after explosives placed in a truck were set off at a gas station in the Shomali village in the suburbs of al-Hilla, 100 km south of Baghdad, on Thursday.

The pilgrims were en route back to Iran from the Iraqi holy city of Karbala, where they had attended religious rituals commemorating Arba’een, the 40th day after the martyrdom anniversary of Imam Hussein (PBUH), the third Shia Imam.

Daesh Takfiri terrorist group claimed responsibility for the attack in an online statement.

“Undoubtedly, such inhuman measures will make the Islamic Republic of Iran’s nation and administration more determined in supporting the Iraqi government and nation in the war against terrorism,” Jahangiri said in a message.

Denouncing the act of terror by Daesh Takfiri group, he said the massive participation of Shia pilgrims in the Arba’een rituals and unprecedented achievements made by the Iraqi Muslims through the unity of people of various ethnicities and faiths in the campaign against Daesh terrorists and their sponsors made the “blood-thirsty terrorists and enemies of Islam” more desperate.

Jahangiri extended his condolences to all Muslims across the world, particularly in Iran.

The latest act of terror by the Daesh Takfiri group came as Iraqi army soldiers and allied fighters have been leading an offensive to retake the strategic Iraqi city of Mosul, the last Daesh bastion in the country, since October 17.