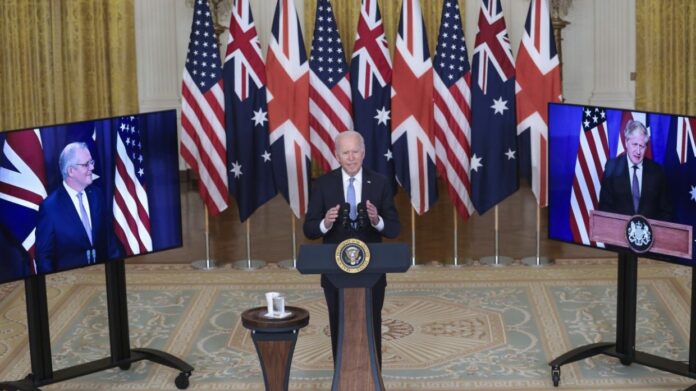 The US-UK-Australia military bloc has heightened geopolitical tensions as well as risks of a return of the Cold War, potential arms race and nuclear proliferation, China warns.

The AUKUS nuclear submarine deal launched by the U.S., the U.K. and Australia could cause hidden dangers to regional peace and stability, as well as international order, Chinese State Councilor and Foreign Minister Wang Yi said Tuesday.

Wang made the remarks when he co-chaired the 11th round of high-level strategic dialogue between China and the European Union (EU) via video link with Josep Borrell, the EU’s High Representative for Foreign Affairs and Security Policy.

He added the three countries have drawn ideological lines and built a new military bloc that will lead to the hidden danger of the resurgence of the Cold War, according to a Chinese Foreign Ministry statement.

The move will cause the hidden danger of an arms race, prompting some regional countries to step up their military development and increase the risks of military conflict, he added.

Nuclear proliferation will be another impact that will damage the nuclear non-proliferation system, like the South Pacific Nuclear Free Zone Treaty, the minister said.

“We urge the three countries to follow the trend of the times and play a constructive role in regional peace and stability,” he stated.

Wang also talked about the relations with the EU, stressing that adherence to the one-China policy is the political foundation of the ties.

Both China and the EU believe that bilateral exchanges should be based on mutual respect, seeking common ground while shelving differences, expanding cooperation and reducing antagonism, upholding the international order based on the UN Charter and international law, and jointly addressing common challenges such as COVID-19 and climate change, he added.

Borrell said developing relations with China is an important agenda of the EU, and it is very important for the two sides to maintain close and smooth communication, the ministry statement added. The EU, he continued, is willing to work with China to prepare for the next stage of high-level exchanges between the two sides.

The EU always pursues the one-China policy, which is an important cornerstone of its relations with China and the EU will not conduct official exchanges with the Taiwan region, he said.

Borrell added that the bloc is ready to continue to strengthen cooperation with China on fighting COVID-19, climate change and biodiversity conservation.