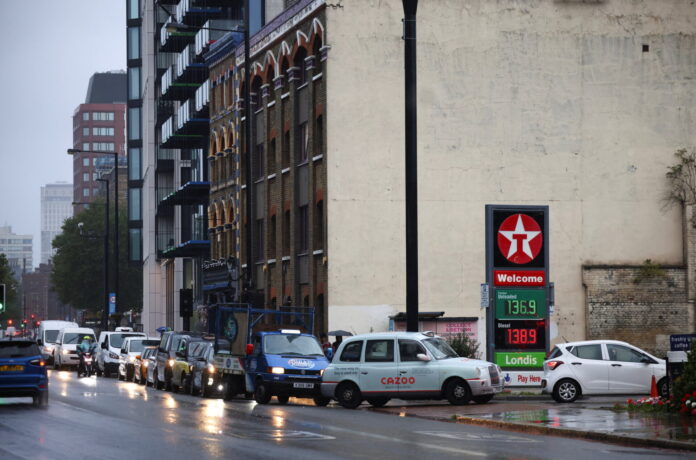 A UK official has warned fuel shortage and long queues at petrol stations across the country could last for weeks. Some 26 percent of filling stations in the U.K. are dry and the British Army is to start delivering fuel to pumps next week, according to reports.

Motorists could face another “week or so” of long queues at the filling stations as demand for fuel remains strong, said Kit Malthouse Minister of State for Crime and Policing at the Home Office.

Malthouse said there needs to be an “improvement” in the situation in the coming days and that Prime Minister Boris Johnson stands ready to review matters if there is any deterioration.

His downbeat assessment contrasted sharply with comments by other ministers in recent days that the situation would swiftly return to normal as drivers resumed their usual buying patterns.

It follows a warning by the Petrol Retailers Association that filling stations were running out of fuel faster than they could be resupplied, with one in four forecourts having run dry.

Malthouse told the BBC Radio 4 Today programme: “We are still seeing strong demand in parts of the country around fuel. The distribution mechanism is trying to respond to this unprecedented demand.”

“My latest briefing is that the situation is stabilising, that we are seeing more forecourts with a greater supply of fuel and hopefully that, as demand and supply come better into balance over the next few days, week or so, that we will see a return to normality,” he said

“I think if things started to deteriorate further, obviously the Prime Minister and the Secretary of State for Energy, whose responsibility this is, will have to review the situation,” he added.

His comments came just 24 hours after another minister – Treasury Chief Secretary Simon Clarke – claimed the situation was “absolutely back under control”.

Earlier this week Johnson ruled out granting priority access to fuel to healthcare staff on the grounds that it was unnecessary as the situation was “stabilising”.

However Malthouse noted there were “pockets” of the country where there were still problems – with London and the south-east reported to be among the hardest hit.

He said efforts were being made to balance out the situation with areas where supplies were strong, but he indicated they were being constrained by the numbers of tankers available.

“What we need to see is a stabilisation and improvement over the next few days,” he continued, adding, “Obviously there are only so many tankers that can be used to get this fuel around. They are trying their best to get around as fast as possible.”

“There is co-ordination now across the country looking at where there are pockets of supply problems and demand strength and trying to bring the two into balance,” he noted.

Petrol Retailers Association executive director Gordon Balmer said that while there were signs of improvement, it was happening “far too slowly”, with 26% of filling stations still completely out of fuel.

He added independent operators in particular were not getting the supplies they needed.

“Whilst the situation is similar to recent days, there are signs that it is improving, but far too slowly,” he said, adding, “Until independents start getting frequent supplies, we will continue to see long queues at forecourts.”

On Wednesday, the Business Secretary, Kwasi Kwarteng announced that the Government was sending out its reserve tanker fleet – driven by civilian drivers – to support the distribution efforts.

However, it is yet to deploy the 150 military drivers who have been on standby since the start of the week to assist with the operation.

Malthouse’s comments raise the prospect that Johnson will go into the Conservatives’ annual party conference – which begins in Manchester at the weekend – with the issue still hanging over the Government.

The crisis began after reports that a shortage of tanker drivers had led a number of BP stations to close, which triggered a wave of panic buying that has yet to fully subside.