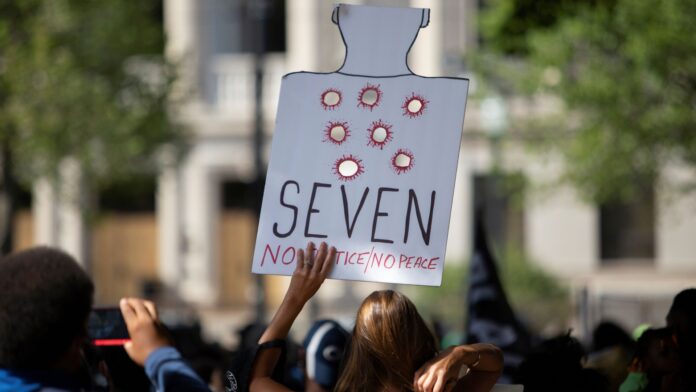 The U.S. Justice Department has announced it won’t file federal criminal civil rights charges against a white police officer for his involvement in the shooting and paralyzing of a black man in Kenosha, Wisconsin, last year.

Officer Rusten Sheskey shot Blake during a domestic disturbance in August 2020. The shooting, which left Blake paralyzed from the waist down, sparked several nights of protests.

“For the reasons [police] said they shot me, they had every reason to shoot him, but they didn’t,” Blake told CNN in August, adding, “Honestly, if his skin color was different – and I’m not prejudiced or a racist – he probably would have been labeled a terrorist.”

At a pre-trial hearing this week, an expert called by lawyers for Rittenhouse said he had been justified because the men he shot confronted him and two tried to wrestle his gun away. Rittenhouse’s trial begins next month.

State prosecutors decided not to file charges against Sheskey in January, after video showed Blake had been armed with a knife. The US Department of Justice launched its own investigation days after the shooting.

In a statement, the DoJ announced “experienced federal prosecutors from the civil rights division and the US attorney’s office reviewed evidence obtained by the FBI and state investigators to determine whether the police officer violated any federal laws, focusing on the application of deprivation of rights under color of law, a federal criminal civil rights statute that prohibits certain types of official misconduct”.

“They conducted a detailed and lengthy analysis of numerous materials, including police reports, law enforcement accounts, witness statements, affidavits of witnesses, dispatch logs, physical evidence reports, photographs and videos of some portions of the incident,” it added.

The statement concluded by saying the department would not pursue charges against Sheskey, as there was not enough evidence to prove he had used excessive force or violated Blake’s federal rights.

Blake has said he will walk again.

“Yeah, I’m here,” he noted in August this year, “and yeah, I’m about to be walking, but I really don’t feel like I have survived because it could happen to me again. I have not survived until something has changed.”