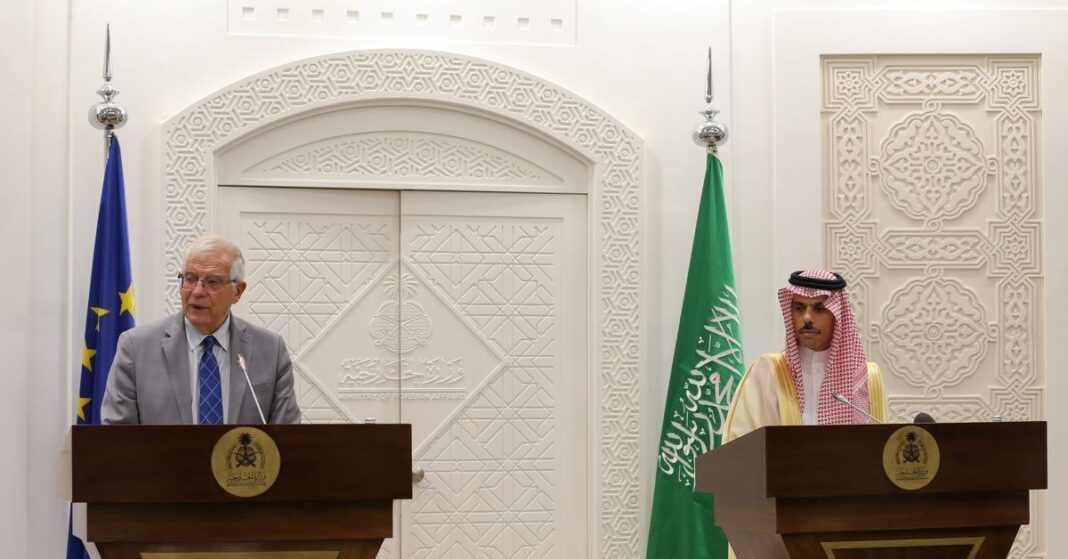 Saudi Arabia’s Foreign Minister Prince Faisal bin Farhan Al Saud said Riyadh is conducting a “dialogue” with Washington regarding the war in Yemen. He says Riyadh is seeking to end the Yemen war.

Speaking at a joint news conference with European Union foreign policy chief Josep Borrell, the foreign minister stated Saudi Arabia has a “very robust” dialogue with the United States to end the war in Yemen.

Riyadh has faced criticism over Yemen, where it leads a military coalition that has been battling the Houthi movement for over six years.

Describing Yemen as a “terrible tragedy”, Borrell voiced support for a peaceful settlement of the conflict, largely seen in the region as a proxy war between Saudi Arabia and Iran.

Turning to the region, he said the EU was ready to pursue trade deals with Gulf countries, saying the bloc supported Saudi Arabia’s modernisation drive.

Brussels was also engaging on human rights and voiced hope the dialogue would produce “real results”, he added.

Saudi Arabia’s social and economic reform drive has been accompanied by a crackdown on dissent, which drew intense international scrutiny following the 2018 murder of Saudi journalist Jamal Khashoggi at the kingdom’s Istanbul consulate.

The EU diplomat, who is in Riyadh following visits to Qatar and the United Arab Emirates, said he briefed his partners on the prospects for restarting nuclear talks and exchanged views with Saudi officials on Yemen and Afghanistan.

The EU has increased its humanitarian aid to Afghanistan since the Taliban took power, but halted development assistance – a move also taken by other countries and the World Bank.

The European Union foreign policy chief said the Taliban government’s behaviour up to now was “not very encouraging”, and any economic collapse in Afghanistan would raise the risk of terrorism and other threats.

“Certainly it’s a dilemma. Because if you want to contribute to avoid the collapse of an economy, in a certain way, you can consider supporting the government … Depending on their behaviour. And their behaviour until now is not very encouraging,” Borrell stressed.

“If the economy collapses, then the humanitarian situation will be much worse. The tension for people to leave the country will be bigger, the threats the terrorist threat will be bigger and so the risks emanating from Afghanistan affecting the international community will be bigger,” he added.

On Sunday, Borrell wrote in a blog post Afghanistan is facing a breakdown of its economic and social systems that risks turning into a humanitarian catastrophe.
Avoiding the worst-case scenario would require the Taliban to comply with conditions that would enable more international assistance, the European Union’s foreign policy chief said.

“Afghanistan is experiencing a serious humanitarian crisis and a socio-economic collapse is looming, which would be dangerous for Afghans, the region and international security,” Borrell added.

Food prices in the country have jumped more than 50% since the Taliban took power in August as the freezing of $9 billion of Afghanistan’s assets held in foreign central bank reserves and the withdrawal of foreign income stokes inflation.

The Afghan banking system is largely paralysed, with people unable to withdraw money, while the country’s health system – which was heavily dependent on foreign aid – is close to collapse, according to Borrell.

“If the situation continues and with winter approaching, this risks turning into a humanitarian catastrophe,” he wrote, adding that this could trigger mass migration into neighbouring states.

The EU response to the crisis would depend on the behaviour of the new Afghan authorities, Borrell said, and any resumption of relations would require compliance with conditions including human rights.

“This requires above all that the Taliban take the steps that will enable the international community to assist the Afghan people,” he stated, adding that female staff from international agencies must be able to do their job.

Borrell met Qatari officials last week in the Qatari capital Doha, where the Taliban have a representation.