A well that is doing well in attracting tourists (Photos) 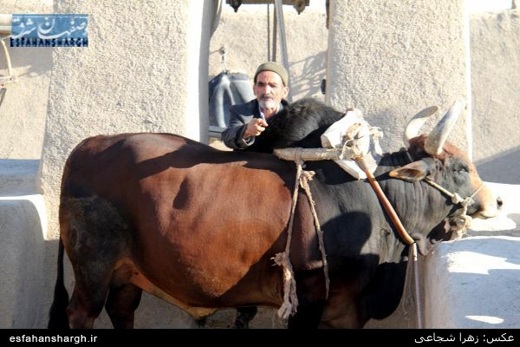 The ox-well complex Haj-Ibrahim has restored has turned into a tourist destination.

A 60-year-old man in Varzaneh, east of Isfahan – known for its traditional architecture and indigenous traditions – has renovated an ox-well complex (‘Gav Chah’ in Farsi), turning it into a tourist attraction.

The complex which features a well, an ox, some rope, a pulley and a bucket pumps water to nearby farmland, without producing air pollution.

Esfahanshargh.ir has filed a report on what Haj-Ibrahim has done to irrigate agricultural land which has also been a pull for tourists. What appears below is a brief translation of the report followed by a collection of photos of the process:

Haj-Ibrahim, who has restored an ox-well complex, says, “We can irrigate some 3,000 square meters of land twice a day through this traditional method which does not need electricity.”

An ox moves on a corridor with a slight slope, called Gav Chah, to take the water-filled bucket from the well. What is astonishing is that Haj-Ibrahim’s ox works only when his owner sings a song.

After restoration, the complex has managed – in a short period of time – to attract visitors who come to the historic city to see the place and its traditional irrigation method firsthand.

The urban structure in Varzaneh conforms to the Iranian architecture and people living there are known for their adherence to local traditions.