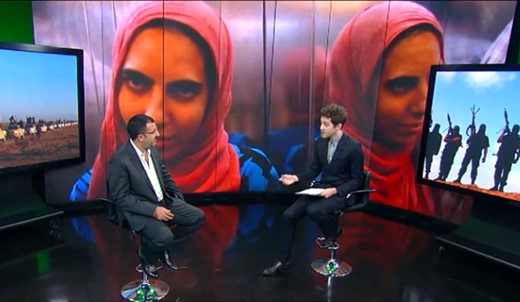 Abu Shuja is a Yazidi man who has single-handedly orchestrated the daring rescues of Yazidi people from ISIS.

A Yazidi man, Abu Shuja, uses his extensive covert network throughout Iraq and abroad, to take back Yazidi captives from ISIS.

Shafaqna (the International Shia News Association) on October 28 released the Farsi translation of the story of this Yazidi man. The following is the original text – in English – of the story Russia Today has recently released on its website:

Despite a $500,000 bounty having been placed by ISIS on his head, Abu Shuja continues to risk his life saving Iraqi Yazidi women and children from Islamic State captivity. “Victims of ISIS” is the story of Shuja and those he freed as told to RT documentary.

The Yazidis, a religious minority in modern-day Iraq, fell victim to Islamic State (IS, formerly ISIS/ISIL) as militants moved deeper and deeper into the country, seizing increasing amounts of territory. IS overwhelmed Mount Sinjar, the homeland of thousands of Yazidis, in August 2014, turning life there into a nightmare.

Along with their territories, the Islamists captured thousands of Yazidi people – some men, but mostly women and children. According to different estimates, roughly 5,000 Yazidis were kidnapped. Women and children have ended up on the slave market, while little boys are subjected to militant training.

For Abu Shuja, a Yazidi himself, the IS invasion was the moment he knew that he had to take action.

“I have ventured into ISIS territory 15 to 20 times. I have now saved about 200 children, women and girls,” Shuja told a RT documentary crew which traveled to Sinjar.

Shuja has been using his underground network to steal Yazidi captives back from IS.

“After the ISIS bandits seized Sinjar, they enslaved about 5,000 men, women and children. This happens to people in the 21 century. There is no one to save them. The whole world just watches,” he said.

Now Shuja organizes and takes part in rescue missions, saving the abducted from terrorists and reuniting them with their families.

While helping to return those kidnapped back to their homes, Shuja’s mission is also personal – his three cousins remain in IS captivity.

“I can’t save them. I cannot locate them. They are why I started this work in the first place,” Shuja said, displaying a photo of three young women stored on his phone.

For Shuja and his people, locating and freeing IS victims means risking their own lives every day.

“I have been receiving threats from ISIS since the day I started working … ISIS realized that I’m freeing those they captured, we have been caught many times,” Shuja, who is now in Moscow, told RT news.

“ISIS has promised $500,000 for anyone who’d give them information or catch me or bring me to them,” Shuja said in RT documentary’s 48-minute long film.

Many times Islamists approached Shuja’s vicinity, but failed to capture him. He says he was afraid at first, but then he got used to threats.

“So far I’ve lost 15 people, helping to carry out rescue missions. Twelve of them were beheaded, their bodies put on display. Two of my men were lured into a trap by ISIS recently,” he told RT news.

However, neither the bounty, nor the deaths of his team members have frightened Shuja enough to stop his mission.

With support from his family, who fear for his life but accept and praise what he has to do, Shuja continues freeing Yazidis from captivity.

“We all die eventually. Death only comes once. Dying twice would be a problem,” Shuja says. “I’d rather die a brave, honorable death than a shameful one.”