US Warship’s Use of Persian Language Shows Iran’s Authority: IRGC 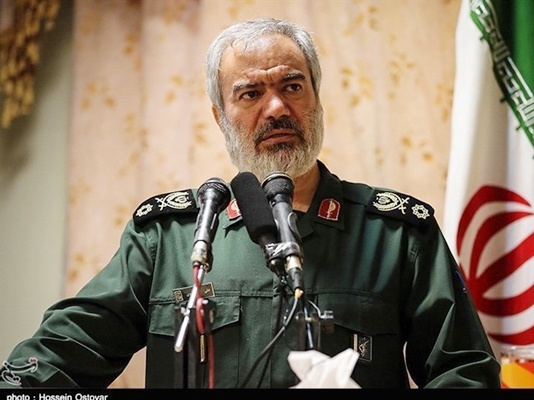 A senior IRGC commander says the US battleships use Persian language for their communications with Iranian guards in the Persian Gulf and this is a proof of Iran’s authority in the region.

IRGC’s Second in Command Rear Admiral Ali Fadavi said the US warships deployed in the region are not operational and are under the full control of Iran’s Army and the IRGC.

“Today and at present, the smallest number of warships of the US and its allies are based in the Persian Gulf. In the past, more than 300 US battleships and five out of its nine carriers were in the Persian Gulf,” underlined Fadavi.

IRGC’s Second in Command went on to say that since many years ago, Iran has shown so much authority in the region that they have to speak to the Iranian forces stationed in the north of the Strait of Hormuz to let them move in the Persian Gulf and Strait of Hormuz, and they cannot approach the Islamic Republic’s coastal waters.

Tensions have spiked between Tehran and Washington after the US sent more military forces to the Middle East, including an aircraft carrier, B-52 bombers and Patriot missiles, in a move that US officials claim is because of the Islamic Republic’s threats to their troops and interests in the region.

However, Acting US Defence Secretary Patrick Shanahan said Tuesday that Washington has no interest in escalating tensions with Tehran or going to war with the Middle Eastern country.

Iran’s Leader Ayatollah Seyyed Ali Khamenei has also said earlier that Iran does not intend to wage war with the United States, but will continue to resist Washington.