‘US Hell-Bent on Solving Its Iran Problem Once for All’ 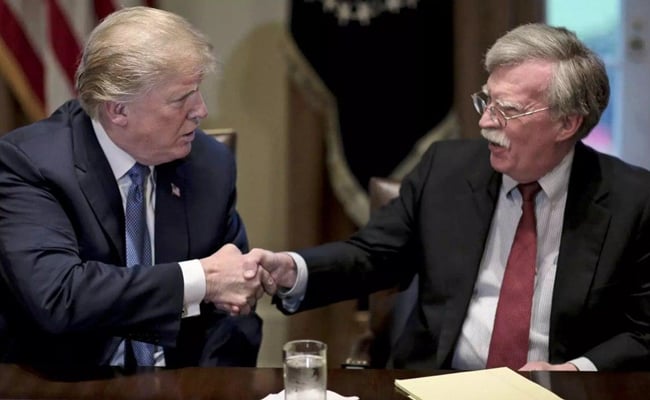 An expert on US politics believes Washington is hell-bent on settling its Iran problem once and for all, launching a full-scale war against the country that targets Iran’s economy, among other sectors, to bring the country to its knees and cause a regime change.

Amir-Ali Abolfath, in an interview with Khabar Online, said he believes the administration of Donald Trump hopes his policy of exerting maximum pressure on Iran would work, sooner or later.

What follows are excerpts, selected by IFP, from the lengthy interview, which addresses challenges facing the Trump administration and Iran-US relations:

How serious are speculations concerning Trump’s impeachment? Trump is under scrutiny for his connections with Russia and paying hush money to women. Moreover, US lawmakers are apparently at loggerheads with Trump over Saudi Arabia. Can such controversies push Trump out of the White House?

In the US, impeachment is in the first place a legal process, not a political one. So impeachment is impossible unless allegations are raised and lawsuits are created against the sitting president. Up to now, no evidence proving Trump has violated federal law has been publicized. However, last week we had two revelations about Trump from Michael Cohen, his former lawyer. Firstly, he confessed that Trump had ordered gifting a luxurious apartment worth up to $50 million in Moscow to Vladimir Putin in exchange for Russia’s support during the election time. Secondly, according to Cohen, Trump had ordered paying hush money to women with whom he had sexual relationship. If these allegations lead to a lawsuit and Trump is found guilty of breaching the federal law, its report will be given to the Congress and the political process will be started. But there is no sufficient proof against Trump as we speak.

Trump has problems with key people in his government, including Nikki Haley. Many people in his team have opted out in the past two years. Can these frequent replacements undermine his administration?

Haley was quite a neophyte when he started his job at the UN. She has said she knew nothing about the UN when she was offered the seat of the US representative at the organization. Before acquiring the post, Haley was just the governor of a US state. Trump’s management style leads powerful politicians to become unwilling to work with him. Trump wants people in his team to fully obey him. Trump said he dismissed Tillerson since he was not obedient. This is while a top diplomat is tasked with informing the president of realities of the diplomatic world. If the president do not listen to experts and insist on his words, there will be problems. The visible chaos in the US foreign policy and frequent disturbances in the US policy towards Iran, North Korea, China and even US allies shows Trump does not pay any heed to words of his advisors. That’s why many people don’t like to work with Trump.

What about bin Salman’s case? Following the CIA report blaming the Saudi regime for Khashoggi’s death, many senators adopted harsh positions against Saudi Arabia. Can Khashoggi’s case unite the Congress against Trump?

The negative attitude towards Saudi Arabia has existed in the US since many years ago. This is not about bin Salman or Khashoggi. The US elites fear Saudis have grown too powerful or at least like to show themselves too powerful. Americans do not like governments in the Middle East to gain much power, whether they are led by the former Shah of Iran, Ayatollah Khamenei, Erdogan or bin Salman. The US defines missions for governments. But they might move to hit them if they grow too powerful. This is not just the policy of Trump, but it was the policy of Obama and other US presidents. Americans are wary that Saudi Arabia is pursuing dangerous goals. So they are using Khashoggi’s death as a pretext to place pressure on Saudi Arabia. This is the only logical explanation for the wave of US attacks against Saudi Arabia over the murder of a journalist.

So what about the US strategy for the Middle East? Is the US using Saudi Arabia to counter Iran?

It’s true that Saudi Arabia plays a key role in the US strategy to contain Iran. The US has a role to play in the region, whether voluntarily or involuntarily. It is costly to run an empire in the region, but the US is not capable of paying that cost so they need to delegate their tasks to regional powers. This power vacuum enables the rise of regional powers. In West Asia, three governments are capable of becoming a regional power: Iran, Saudi Arabia and Turkey. Iran has been at loggerheads with the US for over 40 years, while the oil kingdom depends on the US for its security and Turkey is a NATO member. However, the US has found problems with its main allies in the region. For example, the US recently imposed sanctions on Turkish ministers over the detention of an American pastor. But was an American pastor that important? The US is worry Turkey could go out of control. The US is wary about the behavior of its allies, from Germany and France and Britain to Saudi Arabia.

The standoff between Iran and the US has become too complicated in recent years. Trump is increasingly hostile towards Iran, unlike the previous administration who adopted a softer line. Why the Obama administration signed the nuclear pact to settle problems with Iran but Trump withdrew from that agreement?

There are many factors at play. The Islamic Republic wants neither war nor peace in its relations with the US. Previous US administrations were okay with this attitude, willingly or unwillingly. It seems the current government does not prefer a continuation of such circumstances. It says we should either engage in war with Iran or make peace with that country. That’s why the US issues dire threats against Iran and withdraws the nuclear accord and attacks the Iranian government, while at the same time it says I’m ready for talks with Iranians. Americans want this conflict to end soon. But Iran seeks to keep the status quo. The Iranian Leader said there will be neither war nor negotiation. However, in Trump administration, nationalistic figures believes this is dangerous and the US needs to settle its Iran problem. They have frequently announced Iran should choose between being a normal state or a revolutionary one. If Iran becomes what they say is normal, many of their problems in the region will be settled.

Iran has been dealing with sanctions for over 40 years. The path Trump has taken on Iran has been tested before. Does Trump really think sanctions will work?

If you put yourself in their shoes, you may reach this conclusion. They believe sanctions prompted Iran to come to the negotiating table in 2013. We don’t accept this, but they think that way. Sanctions work sooner or later. Moreover, they have pressuring Iran with full force. They believe the liberal attitude in the former White House didn’t allow for maximum pressure on Iran. They say the Obama administration was concerned about its anti-Iran coalition and whether the interests of China, Europe and others are respected. They believe Obama had limits in Iran policy but Trump has no limits and this will force Iran to budge. The US administration is watching Iran. They believe Iran has changed tack in Syria in the past few months. US intelligence agencies believe Iran is not close to Israel’s border in Syria anymore. They believe their pressure caused this, even if Iran does not admit that. This pressure works in Syria, Iraq and Yemen. So Trump thinks pressure will certainly works. They even believe they can bully China, which is much stronger than Iran.

But Iranians believe there are no logical justifications for talks. Are there any guarantees the outcome of the new talks will be respected?

Americans are not after dialogue, they demand obedience. They don’t answer to Iran, Russia or the UN. You might remember that during the nuclear talks in 2015, a group of US senators sent a letter to the Iranian government saying the next US administration won’t abide by the nuclear pact. This is happening to Russia and China too. Trump easily walks out of the deals. How can we trust assurances from him? Who can stop the US from violating the deals?

Could Trump choose the military option regarding Iran?

I believe the age of 20th-century wars is over. Those wars started by the US-Spain war in 1898 and ended with the Iraq war in 2003. This wars were associated with heavy artillery fire, massive deployments and high casualties. Since 2003, the US has started a new era of war, the 21st-century wars. These wars include economic sanctions, cyber-attacks, proxy wars and indirect pressure on governments. The US is trying all of them regarding Iran. The US won’t engage in 20th-century wars with Iran, Syria or even Libya. The US is seeking to deal heavy blows to adversaries without shooting a single bullet. So Iran is in the middle of a full-scale war with the US. The only difference is the weapons used in this battle.