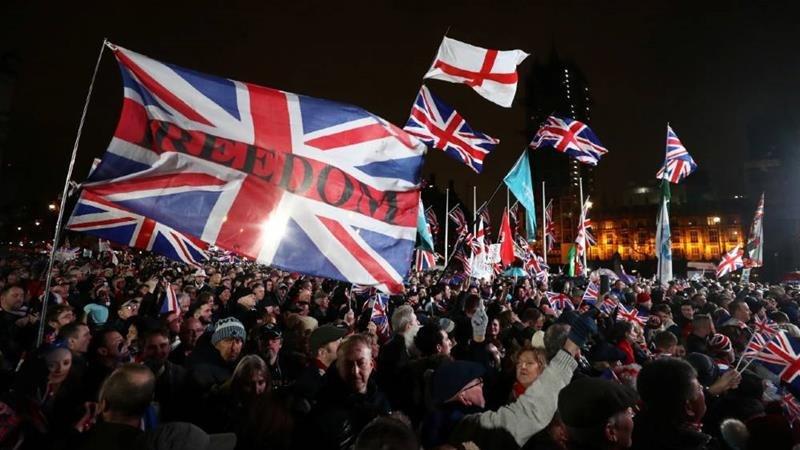 With little fanfare, the United Kingdom left the European Union on Friday after 47 years of membership, taking a leap into the unknown in a historic blow to the bloc.

The UK’s departure became official at 11 p.m. (2300GMT), midnight in Brussels, where the EU is headquartered.

Thousands of enthusiastic Brexit supporters gathered outside Britain’s Parliament to welcome the moment they’d longed for since Britain’s 52%-48% vote in June 2016 to walk away from the club it had joined in 1973.

The flag-waving crowd erupted in cheers as Big Ben bonged 11 times — on a recording. Parliament’s real bell has been silenced for repairs.

In a message from nearby 10 Downing St., Prime Minister Boris Johnson called Britain’s departure “a moment of real national renewal and change.”

But many Britons mourned the loss of their EU identity, and some marked the passing with tearful vigils. There was also sadness in Brussels as British flags were quietly removed from the bloc’s many buildings.

Whether Brexit makes Britain a proud nation that has reclaimed its sovereignty, or a diminished presence in Europe and the world, will be debated for years to come, AP reports.

While Britain’s exit is a historic moment, it only marks the end of the first stage of the Brexit saga. When Britons wake up on Saturday, they will notice very little change.

The UK and the EU have given themselves an 11-month “transition period” — in which the UK will continue to follow the bloc’s rules — to strike new agreements on trade, security and a host of other areas.

The now 27-member EU will have to bounce back from one of its biggest setbacks in its 62-year history to confront an ever more complicated world as its former member becomes a competitor, just across the English Channel.

French President Emmanuel Macron called Brexit a “historic alarm signal” that should force the EU to improve itself.

“It’s a sad day, let’s not hide it,” he said in a televised address. “But it is a day that must also lead us to do things differently.”

He insisted that European citizens need a united Europe “more than ever,” to defend their interests in the face of China and the United States, to cope with climate change and migration and technological upheaval.

In the many EU buildings of Brussels on Friday, British flags were quietly lowered, folded and taken away. This is the first time a country has left the EU, and many in the bloc rued the day. EU Commission President Ursula von der Leyen lamented that “as the sun rises tomorrow, a new chapter for our union of 27 will start.”

But she warned Brexit day would mark a major loss for the UK and said the island nation was heading for a lonelier existence.

“Strength does not lie in splendid isolation, but in our unique union,” she said.

Johnson insisted post-Brexit Britain would be “simultaneously a great European power and truly global in our range and ambitions.”

“We want this to be the beginning of a new era of friendly cooperation between the EU and an energetic Britain,” Johnson said in a pre-recorded address to the country broadcast an hour before Britain’s exit.