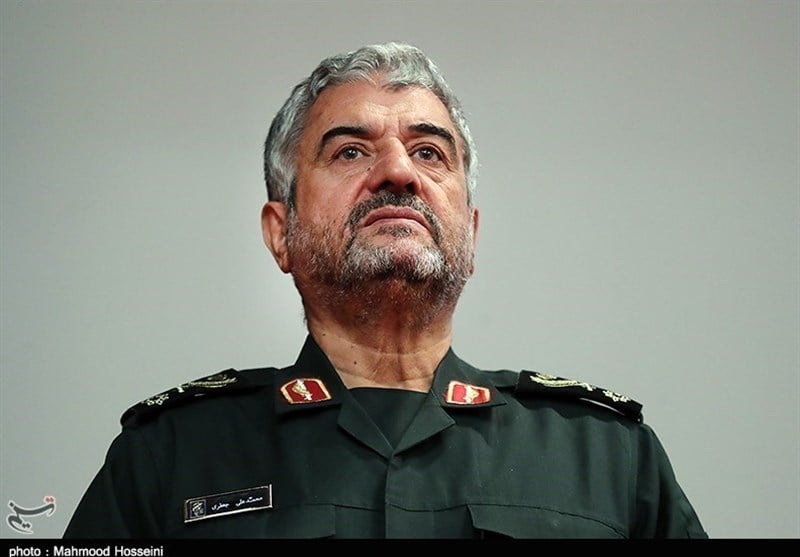 Commander of the Islamic Revolution Guards Corps (IRGC) said US President Donald Trump’s move to call Iranians a terrorist nation reveals the depth of his foolishness.

“The US president is so stupid that he directly insults the Iranian nation, and this results from the witlessness and stupidity of the enemies,” Major General Mohammad Ali Jafari said on Thursday, reacting to Trump who on Tuesday branded Iran a “terrorist nation”.

The commander said while the US government was unable to fight a fire in California, it has been “insanely” supporting its stooges including the Al Saud regime.

Highlighting the US’ waning power and influence in the world, Major General Jafari said Washington’s plot for a so-called Greater Middle East has ended in complete failure.

“While the US sought to expand Israel, the small 4-span regime, from the Nile to the Euphrates,” the commander added, the usurping and child-murderer Israel is now faced with such a situation that it cannot even stand against the people of Gaza.

Expressing an upbeat view of the US failure in its economic war against Iran, Major General Jafari said the analysts and even some American and European officials talk about the US defeat.

In November 2017, Leader of the Islamic Revolution Ayatollah Seyed Ali Khamenei had slammed Trump for calling Iran a “terrorist nation”, saying such a stance indicated Washington’s deep grudge and hostility toward not only the Islamic Establishment, but also the people of Iran.

“This foolish remark (by the US president) shows that not only Americans have enmity with Iran’s leadership and government, but even they hold grudges and hostility toward the very existence of a tireless and resistant nation,” Ayatollah Khamenei said.