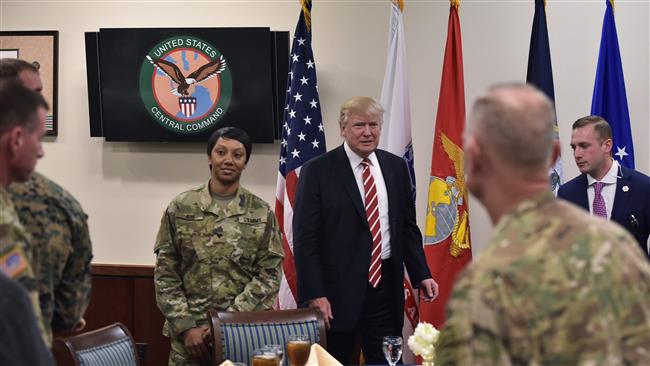 The US State and Defense Departments have cautioned President Donald Trump against designating the Iranian Revolution Guards Corps (IRGC) as a terrorist organization, a report says.

The White House has been weighing designating the IRGC – the elite arm of Iran’s security forces — and Egypt’s Muslim Brotherhood as “Foreign Terrorist Organizations,” Trump administration officials familiar with the matter told CNN.

But, the officials said, Trump did not sign executive orders on the issue after US national security agencies warned the president about the consequences of such a move, the US news network reported on Thursday.

President Trump was scheduled to sign the IRGC order on Monday during his visit to the US Central Command (CENTCOM)’s headquarters in Tampa, Florida, but the plan was put on hold after the State and Defense Departments expressed “serious objections,” according to the officials.

The US military’s CENTCOM deals with issues in the Middle East, North Africa, and Central Asia, most notably Afghanistan and Iraq.

It is not clear now if Trump will sign the order regarding the IRGC.

The officials said Trump was told that designating the IRGC as a terrorist organization would create serious problems for Iraqi Prime Minister Haider al-Abadi, who is receiving assistance from both the US military and the IRGC in his fight against the Daesh (ISIL) terrorist group.

In addition, they said that US national security agencies are also concerned that American military and embassy personnel in Iraq could be targeted after such an action from the United States.

This is while, according to reports, some officials from the Trump administration have received money from the anti-Iran Mujahedin-e Khalq Organization (MKO) to deliver speeches in support of the terrorist group.

Trump’s transportation secretary, Elaine Chao, received $50,000 in 2015 for a five-minute speech to the political wing of the MKO, which has carried out numerous terrorist attacks against Iranian civilians and government officials over the past three decades.

In March 2016, Chao received another $17,500 for a speech that she gave to the Iranian-American Cultural Association of Missouri, which reportedly has ties with the MKO terrorist group. Chao is the wife of Senate Majority Leader Mitch McConnell of Kentucky.

Former mayor of New York City Rudy Giuliani, who is also likely to get a post in the Trump administration, has also acknowledged that he has been paid by the MKO for his appearances at the terrorist group’s events.

Out of the nearly 17,000 Iranians killed in terrorist assaults since the victory of Iran’s 1979 Islamic Revolution, about 12,000 have fallen victim to MKO’s terrorist attacks.

The organization also sided with former Iraqi dictator Saddam Hussein during Iraq’s eight-year imposed war against Iran in the 1980s. The group also helped Saddam in his brutal crackdown on his opponents.

The US State Department added the MKO to its list of foreign terrorist organizations in 1997 for the group’s involvement in the killing of Americans in Iran in the 1970s and an attack on US soil in 1992.

But, now some officials in the Trump administration are reportedly lobbying for the MKO’s removal from the US list of terrorist groups, and designate Iran’s IRGC, which has been fighting against terrorism and aggression since the 1979 Islamic Revolution, as a terrorist organization.

According to some observers, Israel and Saudi Arabia, which are considered main sponsors of terrorism in the Middle East, particularly in Iraq, Yemen and Syria, are pushing the Trump administration to act against the IRGC, an organization that has frustrated their designs on these countries.