The rationale behind Russia’s intervention in Syria 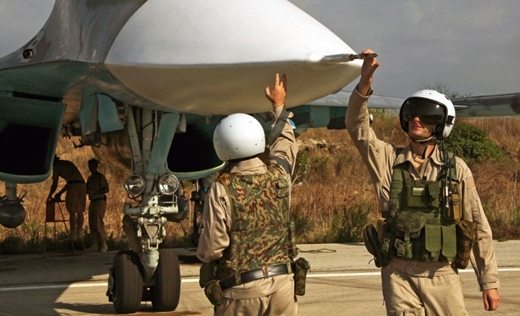 A former IRGC commander has said that Moscow’s military intervention in Syria seems justifiable as far as the Russian national interests are concerned, adding that it will eventually help shift the balance in the region.

Alaei delivered a speech at a scientific meeting on “The Russian presence in Syria and its impact on Iran’s national security and interests” which was recently held in Tehran in cooperation with the Iranian Political Sciences Association (IPSA) and the center for the Middle East Strategic Studies.

Tabnak.ir, a news website, on November 18 published the full text of his speech. IFP will release the translation of parts of Alaei’s remarks in two parts. Part one comes with the original headline “Why has Russia intervened in Syria?” and Part two is headlined “Why is Iran’s security tied to regional peace and security?” The following is PART ONE of the speech:

The speaker first reviewed the major developments in the Middle East which started with the invasion of Kuwait by Saddam Hussein followed by US military interference; and the fall of Saddam, the collapse of the Iraqi [political] structure and destruction of the Ba’ath regime’s Russian-made military hardware.

He then went through the Arab Spring (Awakening Movement of Muslims) in Arab countries which resulted in a mix of national frustration and failures in the Middle East thanks to meddling by the US and its regional allies such as Saudi Arabia. The trend [the speaker followed in his speech] eventually shifted to Syria where is now a hotbed of proxy wars.

All along the path from the occupation of Iraq to the Syrian crisis, Alaei argued, the Americans have always been trying to erase the footprints of their arch rival – Russia [the successor of the Soviet Union]. Now the covert war between the White House and the Kremlin has reached the final stage.

After his introduction, Hossein Alaei said, “[…] Following the popular uprisings in Arab nations, Russia was entangled in strategic passivity and inactivity. This passiveness caused Russia to lose – to a great extent – the bases it used over the course of history to infiltrate the Middle East.

“The policy Russia adopted during the Iraqi crisis and the disintegration of the Ba’ath Party practically cleared the way for the United States to take military action in Iraq. [Back then] The US appointed an American ruler in Iraq and governed the [war-hit] country with its own military before the formation of a new government in Iraq.

“In other words, the structure of the Iraqi government which had a leaning toward Russia since the Ba’ath Party came into office was put aside by the US. That was not all; the Americans – by taking military action – intentionally destroyed the remnants of the eastern structure of the Cold War era in Iraq and disbanded the Ba’ath army not to be worried about [the possibility of] the revival of the Russian structures in Iraq.

“Disbandment of the army in any given country marks the end of the influence of the government which has built up that army. If the US had not disbanded the Ba’ath army, [members of] the demobilized army would have likely turned to the country which had created it.

“The US acted on a pre-planned agenda and disbanded the Iraqi army, because it was the product of the Russians. Such an army had to be dissolved, and all its structure, personnel and equipment had to be destroyed.

“A similar theory was developed by a number of strategists following the NATO invasion of Libya [in 2011] suggesting that Washington would take advantage of the uprising by the Libyan people against [Colonel] Muammar Gaddafi to force Russia out of Libya. NATO air forces launched attacks on Libya’s military infrastructure and bombed all the Russian-made submarines – which had no role in cracking down on people – in the port city of Sirte. This way the US destroyed the Libyan navy and all the Russian structures which dominated the Libyan government and army.

“In the wake of these developments, the Russians felt that they had to pack their bags and leave the Middle East region, because they had nothing else to do. The Russians know that they are unpopular in the public opinion of many countries for holding Marxist views and nurturing dictators. To infiltrate the countries, the Russians can only establish military structures and create like-minded governments in other countries.

“They have no other way to make their presence felt in the political structures and power equations in the region. The Russians realized that if Syria shared the fate of Libya or Iraq, they would be confined to their territorial and geographical borders and the Americans would expand their actions against them.

“A look at developments in Georgia shows that the US is seeking to tighten the noose around Russia by changing the governments in the Commonwealth of Independent States (CIS) or welcoming regime change in the former Soviet republics.

“The last case in point was Ukraine. The Russians captured Crimea, but they lost their power in Ukraine to a great extent. In Ukraine, they lost [the support of] the government. They are becoming smaller [and smaller]. Given the fact that the Russians have gotten involved in other issues in their own region, they will definitely face a big challenge in the Caucasus in the future.

“It can be said that Russia’s military intervention in Syria seems justifiable as far as its national interests are concerned. If Russia had not intervened in Syria militarily, the US would have talked with the Russians solely over Ukraine. But, Russia’s military presence in Syria will see Moscow and Washington talk about larger issues and this will serve as a driving force behind efforts to shift the balance in the region.”