The future of the Middle East, hopes and fears 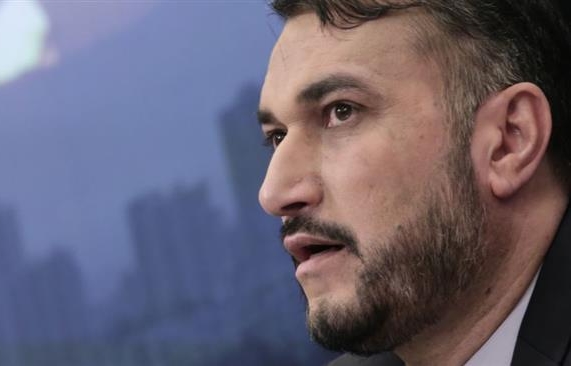 A senior Iranian Foreign Ministry official talks about the Vienna conference on Syria and different roles regional and international players played in the meeting.

The deputy foreign minister for Arab and African affairs has said that different parties involved in the Vienna talks, including the EU and Oman, were insistently trying to convince the Islamic Republic of Iran to attend the talks on Syria.

Hossein Amir-Abdollahian made the comment in a nightly TV news program on Saturday and added that some were trying to misuse Iran’s expression of readiness to take part in the talks to suggest that Iran’s presence is indicative of a policy shift in Tehran and its go-ahead to measures to remove Assad from power.

He went on to say that Tehran attended the talks to announce that the Islamic Republic remains ready to take appropriate steps toward working out a political solution to the Syrian crisis.

The deputy foreign minister further said that in the Vienna talks Iran did not allow other countries to decide what the Syrian people are entitled to make decisions about.

The following is the translation of highlights of Amir-Abdollahian’s remarks on different questions in the news bulletin as reported by the national broadcaster’s news website (iribnews.ir) on November 1:

What happened in Vienna talks?

The other side [the West] was seeking to gain at the negotiating table what it had failed to achieve on military and security fronts – through its five-year support for the terrorists.

The Vienna talks were challenging, complex and tough. The other sides were seeking to seize the opportunity and decide the future of Syria, but they were denied such an opportunity.

Thanks to [Tehran’s] logic and reasoning, the US-proposed plan which was supposed to be put on the table was replaced by Iran’s political views in line with international law and defense of the Syrian people.

In the talks, all Western countries were not on the opposing side; the EU foreign policy representative, and the German and Italian foreign ministers were trying to strike a balance between the views; as a matter of course, France and Britain adopted the harshest stances among the Europeans.

The United States was struggling to tap into the opportunity to achieve its goals; [top] on the agenda was a political mechanism, so the logic and reasoning of the Islamic Republic of Iran was brought into focus and the other sides were denied the opportunity because they lacked any reasoning.

Certain countries, among them Saudi Arabia, were not advocating the right of the Syrian people to self-determination ….. They said that the Syrian people cannot decide their future, arguing that election is not a befitting mechanism to decide Syria’s political destiny and that the political future of the [Arab] country should be decided by them [those countries].

Where to take on terrorists?

For months, Iran was telling the Russians that they will have to take on terrorists in Moscow’s subway stations if they did not engage the terrorists in Syria, Iraq and Yemen.

If Iranian security agencies had not powerfully defended the country against the infiltration and emergence of terrorists, Iran would have been facing the terror groups in the alleys [and streets] of Tehran.

Iran supports those opposition members who believe in political solutions, whereas the West talks about the armed moderate opposition. Iran rejects the armed opposition as terrorists.

At the outset of the Syrian-Syrian talks, a dividing line should be clearly drawn between the pro-diplomacy opposition and those with ties to terrorists, and those groups which attend the national dialogue should have ability and competence, and represent a key part of Syrian society.

Ceasefire is achievable in Syria if …

If countries and security agencies which back terrorists cut off their support for the terrorists right now, establishment of ceasefire across Syria is sure to happen according to a timetable that runs a few months …. Ceasefire can be achieved in Syria, but it takes serious regional and international determination.

Yes to Iran’s oil and banking sanctions, no to sanctions on ISIS

Based on Iran’s intelligence, the ISIS terror group lacks the capabilities to hit a passenger plane in high altitudes. If technical glitches are not to blame for the crash of the Russia plane, the reason should be looked for among countries which opposed Russia’s military action in Syria and in their security agencies and advanced military capabilities inside and outside the region.

No winner in Yemen crisis

The Saudis, Americans and other Western officials had said that they would settle the Yemeni question in less than three weeks. On different grounds, those three weeks lasted more than six months with Western support and the deafening silence of the West and even some regional Muslim nations.

Different Yemeni groups, nomads and people who care about their country’s unity and security did not let the Saudis settle the question by military means.

We hope the Saudis will walk down the path of wisdom this time around, make up for their past mistakes, pursue a diplomatic approach and let the Yemenis decide their own future.

I have no doubt that all Yemeni groups care about the security of the entire region, including Saudi Arabia, if they are given the chance to decide their own fate, but it needs insight on the part of the Saudis.

The third Intifada, reaction to Judaization of Beit-ul-Moqaddas

The current situation in occupied Palestine is the direct result of the Zionist regime’s wrong approaches and the mistake by certain Western countries in supporting the Zionist regime, its continued settlement activity and Judaization of Beit-ul-Moqaddas.

What we see in Palestine is a third Intifada which signals a powerful message for the Zionists. It also conveys a message of unity for the Palestinians and for resistance in the region.