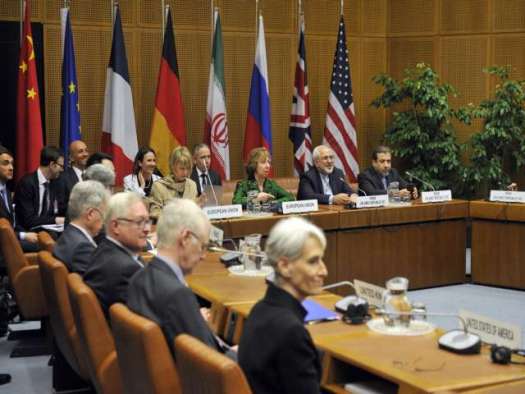 A principlist expert says talks with the US and P5+1 won't result in the outcome Iran favors.

Prior to the inconclusive ending of a seventh round of nuclear talks between Iran and P5+1 in New York, principlist dailies in Iran kept beating the drum of a possible failure of the negotiations. One such newspaper was Vatan-e Emrooz, run by Mehrdad Bazrpash, who has a seat on the Presiding Board of parliament and is a close ally of former President Mahmoud Ahmadinejad. On September 20, the daily, which makes no secret of its criticism of President Rouhani, published an exclusive interview with Mehdi Mohammadi, a political analyst and nuclear talks expert.
The assessment of this well-known principlist media figure of the talks has nothing to do with the venue or timing of the talks – rather it is based on an unshakable principlist stand that will remain in effect, at least for the duration of the current round of talks between Iran and the world powers: “The Geneva Interim Agreement is unlikely to produce a satisfactory outcome for Iran.” In light of the fact that Tehran and the P5+1 are to pick up the nuclear talks in a European city in less than two weeks, part of Mohammadi’s comments retain its relevance. The following is the translation of an excerpt of his answer to a question on the existing mistrust between Tehran and Washington:
Direct contacts with the US have done nothing to soften the stance of P5+1 in dealing with Tehran. Neither have they resulted in any compromise on their part. On the contrary, they have led to a more radical approach in certain areas, because world powers now assume that we need the talks.
The level of mistrust is too high. There is a fundamental difference between the viewpoints of Iranian nuclear negotiators and those [at home] who are critical of them. The critics say in dealing with the US or even when a deal is struck, Iranian negotiators should always bear in mind that an enemy whose approach is based on a formula of fear is sitting across the table.
I personally believe nuclear negotiations are a fear-based arrangement. In these talks no one will make any concessions unless they are afraid, and the extent of concessions they make depends on the level of their fear. Any party that feels it will have to pay a heftier price in case a deal is not struck will back off and offer more concessions.
Some individuals on Iran’s negotiating team do not share my stance. To them the US is not an enemy; rather, it is a rival or even a partner. They seem to be of the opinion that what is going on between us [Tehran and Washington] is rivalry, rather than animosity. That is why they view some of the concerns of the other side as justified and believe trust-building measures are needed to ease those concerns.
For example on Iraq, until the Supreme Leader declared his position some thought Iran could partner with the United States. Ironically, the Americans said the fact that they had the same enemy as Iran in Iraq did not mean the two countries shared the same strategy.
These are two different views. If you sit at the negotiating table with the Americans believing that they are your rival or partner, your approach would be different from when you view the ones sitting across the table as your enemies. This is a fundamental question that I believe will remain open for now.
The most important reason behind mistrust which has intensified during the talks is that there has been no practical sign of any decline in the extent of American hostility toward Iran. It is not just the talks; Iran and the United States deal with each other across the region on a daily basis. If there were any improvement in their behavior, we would have definitely spotted it. It had to manifest itself on one front or another.
Not only has there been no such thing as a decline in hostilities, the American attitude has taken a turn for the worse on many fronts, including sanctions, politics, media and in international institutions. Even on the consular front that the [Iranian] president has promised to restore the cachet of the Iranian passport, things have worsened.
I believe what should be taken into account is the fact that talks with the United States have seen their hostility against Iran grow. The American strategic calculations are to blame for that. Whenever they see pressures pay off, they turn up the heat. That is who they are. One should not expect otherwise.
Pressures will ease only when the Americans feel that their strategy has backfired and stiffened Iran’s resolve. With the approach adopted by the new government, even if there is a final deal and sanctions are eased on certain fronts, which is not unlikely, more pressure will be brought to bear in other areas.
President Rouhani’s administration has assured the US that its strategy of pressure pays off, so it has to pay the price for its missteps by tolerating more pressure. That is the American-style logic, and there seems to be no solution to it.