Talks with US Out of Question as Long as Sanctions in Effect: Iran 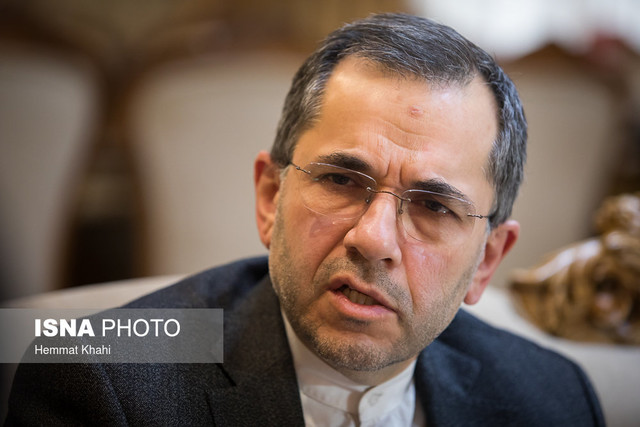 Iran says any negotiations between Tehran and Washington, including a possible meeting between the two countries’ presidents, are out of the question as long as the US maintains its policy of economic terrorism against Iranians.

Majid Takht-Ravanchi made the comment in response to a question on US President Donald Trump expressing willingness recently to hold talks with his Iranian counterpart Hassan Rouhani.

“We have announced time and again, and the respected Iranian president has also announced it loud and clear that there will be no room for talks as long as the US government’s unfair sanctions and economic terrorism against Iranian people continue,” said Iran’s top envoy in an interview with IRNA.

“We can discuss the issue only when they lift unfair sanctions. Then it will be possible to hold a dialogue within the framework of the 5+1 group and in keeping with the talks we held previously in the nuclear domain,” he said.

“Holding talks is out of the question as long as sanctions remain in place,” he reiterated.

“So, our stance is crystal clear, and the Americans know, too, that we will not accept the maximum pressure policy, whatsoever, and we regard the sanctions imposed on Iranian people as unfair, and they should be lifted” he said.

He then touched upon some media speculation that Trump’s recent move to dismiss US National Security Advisor John Bolton might set the stage for Tehran-Washington talks.

Takht-Ravanchi said Bolton’s dismissal is a domestic issue of the United States.

“The issue of changes and developments within governments is a domestic matters and exists in all governments,”
“The replacement of Bolton is one such issue, and we do not take any stance on countries’ internal affairs,” he said.

Takht -Ravanchi then touched upon the impact of Bolton’s removal on reducing Washington’s hawkish and extreme stances.

“It is too early to make judgment in this regard.

Bolton was known for his hawkish approach, and this is something that Mr Trump had clearly said,” he noted.