Syrian Opposition has to accept Iran in Geneva-3 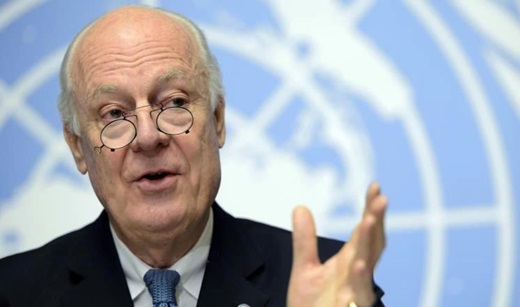 The international community has digested the fact that regional problems cannot be solved in Iran’s absence, says a former ambassador.

Staffan de Mistura, the UN special envoy in Syria, has invited the Islamic Republic of Iran to an [international] conference – dubbed Geneva-3 – in a bid to work out a solution to the Syrian crisis.

In reaction, Vice President of the National Coalition of Syrian Revolution and Opposition Forces (NCSROF) Hisham Marwah has said the coalition will not attend the conference.

His opposition [to Iran’s presence] comes after Khaled Khoja, the president of the National Coalition of Syrian Revolution and Opposition Forces, welcomed Iran’s invitation to the Geneva-3 Conference on Syria.

Fararu, a news website, has conducted an interview with Mohammad Irani, a former Iranian ambassador to Jordan and Lebanon, asking him about the possible boycott of the Geneva-3 Conference by the Syrian opposition. What follows is the translation of excerpts of Irani’s views on the conference:

The NCSROF seems to be divided over different issues, including Iran’s presence in the conference.

I think conditions [on the ground] have changed to some extent. Thanks to advances over the past two weeks in Idlib Governorate and some areas in southern Syria, the armed opposition and other people who are part of this coalition think their position has now improved.

Drawing on the new developments and the illusion that they now have the upper hand, the coalition has shown objection to Iran’s presence.

However, they are ignorant of the fact that the Syrian developments are affected by and intertwined with what plays out across the region, among them the developments of the Arabian Peninsula.

The fight on extremism and terrorism – especially taking on ISIL – is one of the major topics on the agenda in the Geneva-3 Conference. A serious and collective will [by members of the international community] is needed to counter ISIL.

The problem [the terrorist grouping and its indiscriminate crimes] won’t be solved unless Iran – which is one of the most influential regional players – becomes part of efforts to take on ISIL. This is an undeniable fact the West now appreciates. […]

Despite a verbal invitation by the UN secretary general to Iran to attend the Geneva-2 Conference, the NCSROF disapproved of Iran’s participation due to opposition and pressures by regional governments.

As it was predictable, the Geneva-2 Conference failed to produce a remarkable result simply because it did not bring on board all influential players in the Syrian crisis.

I think the Geneva-3 Conference too cannot play a key role in determining the future of Syria. Its prospect is not bright due to numerous problems that have arisen on the Syrian political scene and elsewhere in the region.

Add to it the possible absence of Iran – which has played a decisive role in different political questions in the region – and you will see that the conclusiveness of the Geneva-3 Conference will be dramatically overshadowed by such absence.