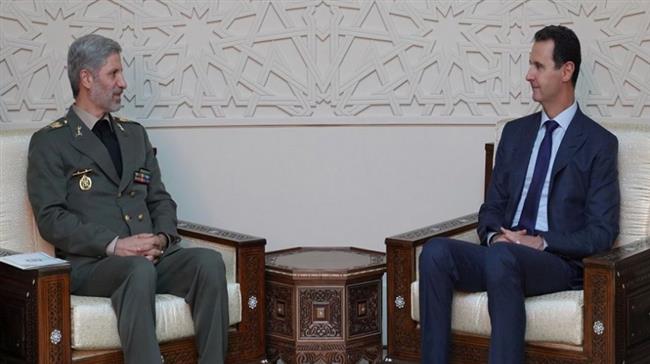 Iran's Defense Minister Brigadier General Amir Hatami has hailed the steadfastness of the Syrian people and government forces in their battle against terrorism, expressing confidence that they will achieve a final victory in this path.

“Not only regional people, but people around the world are indebted to the fight carried out against terrorists in Syria,” Hatami said in a meeting with Syrian President Bashar al-Assad in Damascus on Sunday.

He expressed confidence that the Syrians have the ability to continue their fight against terrorists until achieving a complete victory and defeating terrorism.

The Iranian defense chief reiterated his country’s support for Syria’s unity regardless of threats and pressure from some countries, which are supporting terrorism.

He said Iran stood by the Syrian people and nation since the beginning of war there more than seven years ago and is currently ready to participate in the reconstruction process of the war-stricken country.

“The private sector of the Islamic Republic of Iran has good capabilities and capacities in this regard and can use them in the reconstruction of Syria,” Hatami pointed out.

Iranian First Vice President Es’haq Jahangiri said in June that the Islamic Republic would stand by Syria in the reconstruction process of the war-stricken country.

His comments came after Iranian Foreign Minister Mohammad Javad Zarif said Iran was ready for cooperation with other states to help reconstruct the violence-torn Arab country.

A UN spokeswoman said on Friday that United Nations Special Envoy Staffan de Mistura had invited Iran, Russia and Turkey to talks due to be held in Geneva next month on forming Syria’s Constitutional Committee.

“Special Envoy de Mistura continues his consultation on the establishment of a Syrian-led, Syrian-owned and UN facilitated Constitutional Committee within the framework of the Geneva process and in accordance with Security Council Resolution 22-54 2015,” Alessandra Vellucci said at a news conference.

Iran, Russia and Turkey, as guarantor states for peace process in Syria, expressed their firm determination in late July to counter any plot aimed at partitioning the Arab country.

The Syrian president, for his part, said Tehran and Damascus must outline plans to improve long-term cooperation in order to enhance the steadfastness of the Iranian and Syrian nations in the face of the enemies’ plots.

Assad said the US positions on the Iranian nuclear deal, the imposition of sanctions on Russia and attempts to prolong the war in Syria by supporting terrorists affirm the correctness of the policies pursued by the anti-terrorism axis.

Heading a high-ranking delegation, the Iranian defense minister arrived in Damascus earlier on Sunday to discuss a number of important issues, including the latest regional developments, the fight against terrorism, the strengthening of the resistance axis and the study of strategies for expansion of defense and military cooperation.

In a meeting with his Syrian counterpart, General Ali Abdullah Ayyoub, in Damascus, Hatami warned of extra-regional countries’ plots to sow discord in Syria, vowing the Islamic Republic’s full support for the war-ravaged country in a bid to preserve its territorial integrity and improve its stability.

“Iran will spare no effort to maintain Syria’s territorial integrity, because security in the country will help [improve] regional stability,” the Iranian defense minister said.